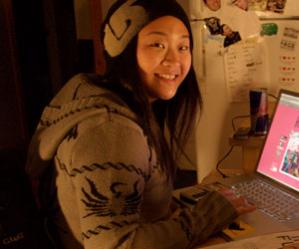 Giving Back. The Yuho Sekihara Intervew.

There is something about snowboarding that makes us strive for more. We make sacrifices, we become devoted. Often commiting yourself to snowboarding spans far beyond the riding itself and we can find this devotion is often the most satisfying.

Snowlife recently caught up with Canadian Yuho Sekihara, an individual who has spent her life giving back to the thing she loves most in life, snowboarding.

Yuho Sekihara has had her fair share of experience in the global snowboard industry. The Japanese born Canadian snowboarder has gone from professional rider to development coach to professional photographer and even a kind Whistler host to up and coming riders. The last 15 years have been good to Yuho and she has been good to the sport.

The 31 year old Vancouver bred Yuho found a natural progression into snowboarding from an early age. “I used to skateboard everyday and wanted to try snowboarding. I always enjoyed participating in sports so it was an easy transition from skiing to snowboarding.” And finding time to go riding was never an issue, “I went to a special school for grade 10 where you spend half the year learning to live outdoors and half the year doing school work… I remember bringing our snowboards to school and having to keep our boards at the principal’s office because they didn’t fit in our lockers.”

Naturally, it wasn’t long before she took in her first Whistler season, “In grade 11, Natasza and I decided to move to Whistler for the summer to ride the glacier”. Her determination to ride meant not even a pending surgery would stop her during this summer, “I actually had a torn ACL but the surgery wasn’t until September so I just wrapped my knee and went riding everyday and iced my knee when I got home. I remember not being able to walk up the 1000 steps we need to get into our house so my room mate Trevor would piggy back me up the stairs. Even though I couldn’t walk because of my knee, I still went riding”. This was the time where it all truly began for Yuho, “after that summer, we were hooked. We moved back to whistler after we graduated and I have never looked back. This is my home now and I love it.”

Yuho’s dedication to riding began paying off when she was hooked up with Option Snowboards. Despite some good success her professional riding career with Option ended after only a short 2 years, “I had too many injuries as well as team budget cuts meant I needed to move on. After they cut me, I rode for Rossignol for a year and ended up with a lot of magazine coverage” but thanks to loyalties, Yuho found herself back at Option and “worked on developing their boards, shooting their catalogues and translating for their Japanese OEM products… I did that for a long time but everyone at Option shifted and new people came in and the new people don’t know who you are and that’s the end of things… funny how it works… I was probably their longest rider but nobody really knew or even cares”.

Throughout her professional career, Yuho experienced her fair share of injuries; “After I tore my ACL in 1995 I was able to get back into snowboarding pretty fast because I was hungry and determined. My career was on track and then I dislocated my shoulder in Feb of 97… all the sponsors were on me about the Olympics and I didn’t have time to heal properly and ended up dislocating my shoulder 14 times while I waited to get shoulder surgery… In addition to my shoulder, I had 7 major concussions in those last 2 years”. Feeling the pressure from sponsors, Yuho went on to compete in the 1998 Nagano Winter Olympics try-outs with her injured shoulder strapped and hardly healed. The life of a professional snowboarder was taking its toll and things were starting to give.

Yuho embarked on the next phase of her life and went to study at university but once winter returned the “itch to snowboard as well as 4 different offers from other sponsors came, so I got lured back into riding and competing… I think that all the hard work had finally paid off and I was ranked top 10 in the world and had won many contests that I couldn’t end my career just yet. I think I was only 21 at the time so I gave it another go with all new sponsors but by then my love of snowboarding as a job wasn’t there any more. There was too much bullshit from my sponsors… I decided to retire from the sport in 2001”.

By this stage however, professional riding wasn’t the only career in snowboarding for Yuho, “by then I had established a tour company as well as created a snowboard photography career… I worked for 8 international magazines so instead of being in front of the camera, my life switched to being behind the camera”

Yuho also went onto the business of snowboarding development in Korea. At the time “snowboarding was a growing sport and people were stoked to try and be a part of that growth. I really enjoy helping people and I had an opportunity to share my passion and create something that allowed more people to be exposed to the sport of snowboarding.” And it is this desire to help people in snowboarding that has seen Yuho open her doors at Whistler to many up and coming Asian riders:

“It is really important for people to be able to have a place to call home where you can ground your roots so your “tree” can flourish. I ended up buying a condo in the village and lived there with Natasza and Sungbae but as the winter approached and there is no housing in Whistler, you end up with a lot of couch surfers…(it) eventually became this crazy little studio with a lot of up and coming Japanese amateur snowboarders. Now all the kids are the top pros in Japan and Korea”.

Yuho’s latest venture in the world of snowboarding has seen her move into film production. “I am working with Tadashi on heart films. (www.heartfilms.com) We are trying to give more exposure to underdog riders… Our main goal is to expose snowboarding to everyone so we can have more people know more about the sport as well as hopefully attract new people to try snowboarding. Snowboarding is fun and being active outside is an awesome thing so hopefully Heart Films inspires people to want to go snowboarding.”

And as if all this wasn’t enough, Yuho also dabbles in Snowboard Consultancy; “I help out companies that may want to know more about snowboarding from translating at meetings to helping create companies from scratch… pretty much anything to do with snowboarding – be it manufacturing to marketing to the women’s market to the Asian market, I try and give advice whenever possible to help grow our sport in the right direction”.

There seems no doubt that Yuho has given to snowboarding much more than she has taken. Her passion and commitment to the sport she loves has seen her take on some great challenges with outstanding success. She was once quoted saying she wants to retire at age 30 and now as this milestone has approached Yuho knows she will never “truly retire” and with the progression of snowboarding and the progression of her friends around her, Yuho finds that the “anticipation alone keeps me working and typing on my computer until the wee hours of the morning – day after day… but i am smiling.”

Yuho would like to thank Heart Films, everyone who is Whistler Snowboard Family, Tadashi Fuse, Natasza Zurek, Dave Murphy and Maelle Ricker for never giving up and living a truly inspirational life through their passion.  Go outside and enjoy everyday!