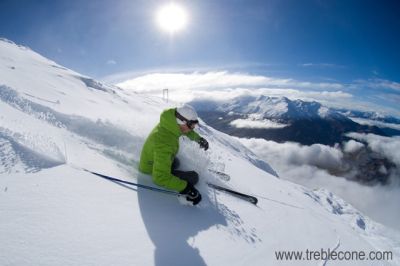 An international standard big air and an extension of its ski improvement programme are just two of the new initiatives announced today by Treble Cone Ski Area as it gears up for the 2010 winter season.

A site in the Main Basin has been identified for a permanent big air kicker, built to FIS (Federation International de Ski) specifications. The purpose built feature will compliment the natural freeride terrain Treble Cone is renowned for and provide a spectacular venue for international standard Big Air competition overlooking the famous Treble Cone view. Its location within sight of the main six-seater express chairlift allows all mountain-goers to enjoy the spectacle.

Treble Cone has a strong focus on high-end improvement and for 2010 it has extended its Ski Achievement products to cover eight weeks from mid-July to mid-September. Courses include two dedicated Women’s Ski Weeks, designed by women for women and aimed at the intermediate to advanced skiers and boarders wanting to move to the next level. There are also Ski Achievement Week Camps starting every Monday from 19 July through to 13 September and an All Mountain Riders programme for snowboarders wanting to take full advantage of Treble Cone’s legendary terrain under the expert guidance of Treble Cone’s instructors.

2010 will also see the start of a staged five-year road improvement project, starting with the installation of a small length of barriers in key points along the mountain access road. And for those who want to check out the conditions from anywhere in the world, Treble Cone has installed a new webcam system that will take high resolution images, not only static shots of the ski field, but also panning from the Lake, up the Main Basin to the top of the six-seater express. The images will also be relayed to screens at the base building so skiers and boarders can check out the weather at the top and in the Saddle without leaving the comfort of the café.

Treble Cone will open on 24 June with an anticipated closing day of 3 October. For further information, visit www.treblecone.com.  ﻿