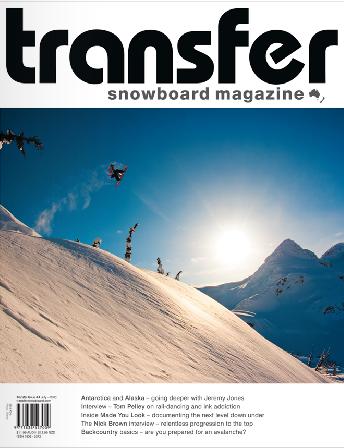 Transfer Snowboard magazine Issue #4 is the second issue of the 2010 winter season and includes the down under Snowboard film Made You Look. It’s now on sale in news stands across Australia and goes on sale in New Zealand July 15th.

“Another crew of ours built and hit this jump when I was out of town during the past northern hemisphere season in Whistler, but no one really got anything on it. The jump gets light late afternoon and only for a short period of time. We got a good reset and were able to go for it again and this is my second hit – a frontside 1080 melon. When I landed, the whole landing slid (avalanched) on me, dragging me to the bottom and burying me up to my chest. We were all expecting it to go because everything north facing had been sliding that day. (Nick) Browner came up and chucked me a shovel to dig myself out and that was that! Good times filming this year with Sandbox – keep an eye out for premier dates of the movie “Now You Know.”

“There is something about this jump that’s special. Maybe it is its location (it’s in the middle of nowhere, somewhere in between Pemberton and a little old mining town called Bralorne) or maybe it’s the fact that we kept going back to it this year, till all the stars lined up, or maybe it’s just the fact that this was one of my first backcountry missions with Jake.
The first time we went up to this spot to scope the terrain out, it was on a cloudy, stormy day. The spot looked perfect from the very beginning, so we decided to start building. By the end of the day the jump was big (you can see maybe one third of it on the photo) and I couldn’t wait to shoot it the next day. Unfortunately, I got the call to go shooting urban stuff with the Sandbox crew and since the weather forecast for Whistler didn’t look too promising, I decided to hit the road.
Jake and the crew went back to the jump a few days later, without me, to hit it, but the weather wasn’t that great, so luckily they decided to wait till they sessioned it again. By that time I was back from Calgary, ready to rock ‘n roll. We went back to the spot and decided to wait for the sun to be at the perfect spot. I remember after we got this shot the sun disappeared behind the peak and it was over. Most of the time people don’t see how much effort riders have to put in to get just one single photo. This is only an example, one of many.”

In this issue you’ll find:

This quiet destroyer from Mt Maunganui, New Zealand has been pushing the levels of snowboarding for a number of years. His first photo in a magazine was a frontside 900, so it’s no surprise that he is now at the forefront filming and pushing it on the global scene. So what makes Browner tick? His good mate Nick Hyne opens him up for an interesting insight to one of New Zealand’s all-time talents.

No Tomorrow – The Tom Pelley Interview

From hyperactive young grommet to one of the most talented riders on the hills of Australia, Tom Pelley has been through a lot, including the death of his best friend Sam. Mark Catsburg talks with Tom to find out how the death of Sam has affected him, why he loves a bit of rail-dancing and how he became addicted to tattoos.

This is a two-part 18-page feature that follows world-renowned big mountain freerider Jeremy Jones and his crew, as they explore the mountains of Antarctica and Alaska, searching for the limits of what is possible both on a snowboard descent and how a human can interact with their environment in a more passive way. These adventures are a monumental moment in snowboarding’s history and represent a turning point for its consciousness.

Meet the riders and the makers behind the new movie that sets a benchmark for antipodean snowboarding. Made You Look features the best current talent from both Australia and New Zealand, who spill the beans on what it was like making the movie and what were their highlights and lowlights.

It promises to be a great issue-make sure you get a copy as soon as it hits stands.