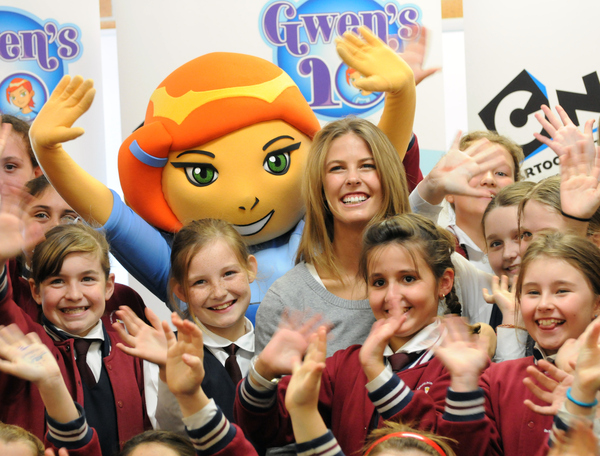 Winter Olympian Torah Bright – whose snow-boarding escapades had Australians glued to their TV screens during the 2010 Vancouver Games – admitted to being “a little nervous” standing in front of 50 girls from Fr John Therry Primary School, Balmain, on Monday.

Torah and ‘Gwen’ happily posed for photos with young girls from Years 4, 5 and 6 before Torah climbed aboard gym equipment with a lucky few from the infants’ years.

The gold medallist was at the school ahead of her judging duties for Cartoon Network’s ‘Search for Gwen’s 10’ – a competition launched to find 10 young girls who embody all Gwen’s best traits.

To enter the competition, girls had to answer an online quiz compiled by child psychologist Kimberley O’Brien.

It was designed to shine a spotlight on the most Gwen-like among the girls – being active, confident, adventurous, hard-working, honest, smart, loyal, friendly, level-headed and quick-witted.

“It really is such an honour to be helping select Gwen’s 10, as there are so many Aussie girls who are passionate about becoming the best they can be,” said Torah, who was at the school to meet some of the 1600 girls who had entered the competition, and to talk to the show’s target age group.

She tackled many of her young audience’s questions. The girls were keen to hear about her biggest fear (falling); her advice for budding snowboarders (private lessons); her earliest dreams about the Winter Olympics (aged 14 or 15); what she did during summer when there was no snow (chases the snow in the Northern Hemisphere and stays at her second home, her Salt Lake City base in the US); what kinds of food she liked (mainly healthy, but very occasionally a fast food option); and if her gold medal was as heavy as it looked (yes!).

Zoe Eaton, of Turner International, said Torah was the ideal role model for all young girls, especially those who aspired to be Gwen-like – capable of promoting higher self-esteem and confidence among their peers, and good ambassadors for healthy, active lifestyles.