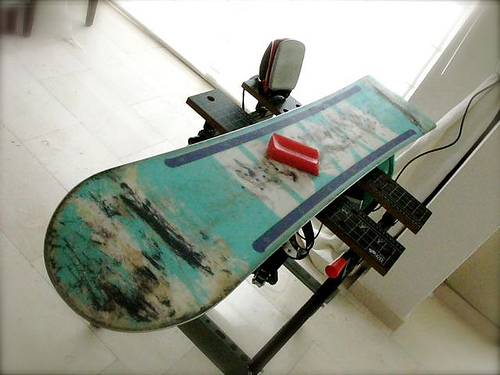 Snowboards are technical things. In their most basic form they can look easy to assemble but when you begin to think about things such as mounting bindings and tunings edges you suddenly realise there is more to simply screwing some screws to getting your board into perfect riding conditions.

Here is your introducting to setting up your snowboard.

First what is an “edge”? Edge refers to the metal covering on either side of the snowboard. It is usually made of stainless steel. The edge is what allows us to turn or to stop. The edge is supposed to be at right angles or 90 degrees, take or give a few degrees. The edges are supposed to be sharp. So watch out for the sharpness of the edges and have them sharpened whenever possible. There are sharpening kits available, which can also prove to be useful.

For maintenance of the edges there are three important aspects to look into;

This is simply smoothening of the rough edges and rough spots until smooth again.

Base Edge. The base edge is beveled at an angle of our choice by placing a beveling sleeve on the file. At the nose and the tail, it should be perpendicular while in the middle of the board, it is usual to bevel it slowly to 45 degrees using firm even pressure.

Side Edge. A flawless 90 degree is mandatory between the base and the side edge. This can be done by hand-eye co ordination or by using some new tools available for the purpose.

Determine Your Stance. Are you regular or are you goofy? If you don’t already know this, think about how you ride a skateboard or surfboard. If you still don’t know try this little trick. Run across a smooth surface in socks and slide across it as far as you can. When you do this, look at which foot you place forward. If it is your left foot, your a regular rider. If it was your right foot, your goofy.

Your bindings are made as a left and right and need to be placed onto the board in a way that reflects either the left or right foot being forward.

Placing the foot on the stomp pad should be done blinding since we would be looking in the direction where we are moving. This should be practiced until it becomes accustomed, failing which we might have to look down to locate the stomp pad and that means an impending disaster.

Stomp pads, if not already installed, can be purchased and installed. Most come with adhesive to stick onto the board and they are relatively cheap.

Ever wondered why some dogs have “leashes” around their necks? It is to prevent their “running away”. The snowboard leashes serve the same purpose. They prevent runaway skis which are very harmful and risky for all in its way.

Almost every leash has a loop that you can just insert into the extra holes on the side of the front binding. We then take the other end of the leash and run it back through the loop so it is tightly embracing the binding. Then we can attach the leash to the leg either at the knee for the types with a long strap and buckle. The smaller strapped versions have a clasp which can be hooked around the laces or through a ring through the boot lace.

Waxing the board regularly helps increase the life of the snowboard and also helps it run smooth. After securing the board base-up in a well ventilated area, we just remove the old wax using scraper. The scraper should be used from tip to tail or tail to tip in a single stroke. Plastic and metal scrapers are available for use.

We use iron box set at lowest temperature to melt the snowboard wax. The heat should be enough to just melt and not smoke the wax! We can test the heat by holding the wax at the base of the iron for a second. If it smokes, it is too hot.

By holding the iron above the base of the board, we just press the wax on the iron. As the wax melts, we move the iron around with the wax to get an even distribution of the wax from tip to tail of the board. Then we apply the iron directly to the snowboard’s base and use it to spread the wax in a thin layer, taking care NOT to stop the iron at any one place. After cooling for 30 minutes, the excess wax is removed with scraper using full length strokes until thin layer of wax is all that remains on the base. Then we need to “clean” the base with a stiff cleaning brush or using heavy duty scouring pad.

2 Replies to “Tips For Setting Up A Snowboard”