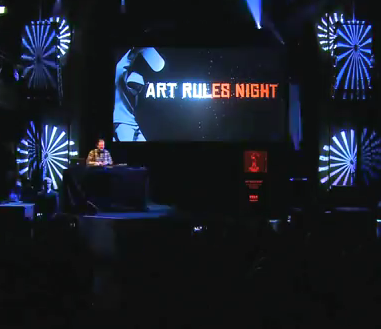 Swiss watchmaker SWATCH and the TTR World Snowboard Tour are delighted to announce the winner of the SWATCH ART RULES DESIGN CONTEST. Chi Fong Leong, a design student at Central Saint Martins in London, was on hand to receive the award at a high-profile ceremony held Saturdy night at Stockholm’s landmark Berns Hotel. An international jury chose Chi Fong Leong ’s design from the contest entries submitted by artists and designers from 45 countries. The winning design will be applied to the SWATCH TTR World Tour Champion trophy, which will be presented to the male and female World Tour Champions at the conclusion of the 2011/12 season.

Chi Fong (a.k.a “Frankie”) Leong’s winning design focuses on the emotional moment when the SWATCH TTR World Tour Champion takes the prized trophy in hand. The design makes use of thermochromatic heat-sensitive paint to reveal the trophy-winner’s own handprint on the trophy: the heat of the winner’s hand causes the trophy to change colour, revealing the handprint offset in white against the black trophy. When the trophy cools, the handprint disappears and the trophy becomes entirely black once again. (The trophy itself was designed by Mark Landwehr without colour in order to allow a wide range of designs to be applied to its surface.)

In a comment about his winning design, Frankie Leong said, “What makes this trophy personal to whoever wins is that their unique handprint will be shown on the surface, portraying their immediate feeling at the time.”

Now in its second year, the SWATCH ART RULES DESIGN CONTEST attracted a great deal of interest in design and snowboard communities worldwide. Artists and designers from 45 countries submitted their TTR Trophy and Swatch watch design proposals online, revealing a broad range of styles and approaches to contemporary design. The entries are on display in the online gallery at www.artrules.swatch.com.

Master of Ceremonies for last night’s SWATCH ART RULES NIGHT was the legendary Swedish rapper ADL. The ceremony, held at Stockholm’s famed Berns Hotel, was followed by a concert with the well known Swedish band Johnossi and a party with the Danish champion DJ Static laying down the dance track live.