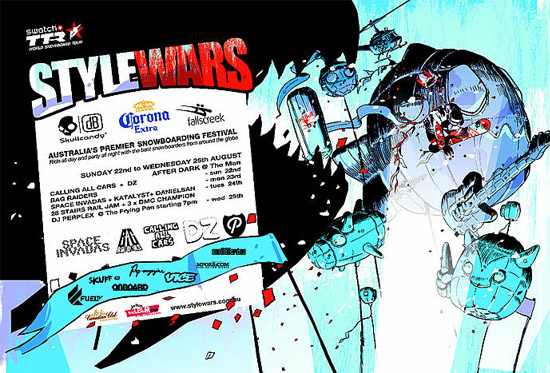 With a month to go before the 8th year of Stylewars anticipation is growing on what’s in store for 2010. At this stage five of the current top 10 World ranked snowboarders are confirmed to compete for the $15,000 in cash and valuable 4-star world tour points and a line up of some of Australia’s top music acts will keep the party going nightly. Known as the endurance marathon of the TRR World Snowboarding tour Stylewars has a history of showcasing the best in world-class snowboarding daily combined with huge nightly parties turning the small town of Falls Creek temporarily upside down.

Leading the confirmed line up of internationals is Sebastien Toutant, from Canada, (currently placed 3rd in the world) who made history last year at Stylewars with the first backside double corked 1260 ever landed in major competition, which helped him to win the overall Stylewars 2009 title. A 16-year old Sebastian left Australia last year in 1st place on the tour only to get injured not long afterwards in Europe shattering his chances of being the youngest snowboarder to hold the number 1 position for year.

The three-day and four-night festival, which is an integral part of the prestigious Swatch TTR World Snowboard Tour, will kick off on Sunday the 22nd of August with the opening party featuring Aussie rockers CALLING ALL CARS, fresh off their tour with AC/DC and Brisbane punk group DZ. Monday will see the opening day of competition in the notoriously well built and world class snowboard park backed up by one of Australia’s best electro acts, BAG RAIDERS. Tuesday will see day 2 in the park and the nightlife will feature SPACE INVADAS, KATALYST and DJ DANIELSAN. The final day of competition is sure to be action paced with a full day in the park backed up by the under lights rail event 28 Stairs featuring 3 x DMC Champion DJ PERPLEX playing till late.

Also confirmed is Charles Reid, also from Canada (currently 9th in the world) returning to Stylewars having won the title in 2008. Both Charles and Sebastian are leaders in street rail competitions and Stylewars boasts a night event called 28 Stairs, which is Australia’s most reputable rail event. 28 Stairs in 2009 saw these two go head to head in duel that resulted in a tied win as the judges had never witnessed such a close competition where each trick was more insane than the one before it and neither athlete faltered over the 2 hours of non stop competition. Charles was not too happy about sharing this title and we can expect him to come out firing in a month’s time.

2010 Air and Style winner Slovenian Marco Grilc will return for his 3rd attempt at winning the night-life party title and 2010 European X-Games slopestyle gold medallist Eric Willett will be back as well to have another shot. Young Swedes Kevin Backstrom and Tor Lundstrom are both confirmed after both proving their park worthiness with Tor taking out a slopestyle title in Hemsedal Norway and Kevin sitting in 6th on the World Tour. American riders, Jeremy Thompson who was the standout at the 2010 Superpark event and Ian Thorley who placed 3rd in the Dew Tour Slopestyle have also just confirmed. Local riders including Ryan Tiene who features in the new Standard Films release The Storming, Robbie Walker, Clint Allan, Jye Kearney and a line up of only Australia’s best will all be hoping to steal some of the glory from the invading internationals.

Stylewars 2010 promises to be the biggest snowboarding event in Australia for the spectators as well as the athletes in both on hill action and out of control nightlife so get to Falls Creek from the 22nd – 25th August and check out the latest information and accommodation packages on www.stylewars.com.au

One Reply to “Stylewars 2010 Coming Soon”