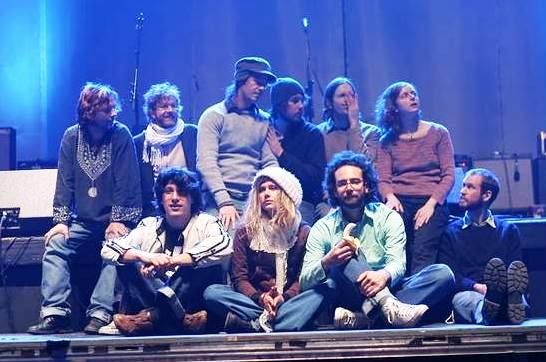 ASPEN — The 11th annual Spring Jam opens Friday with a free concert in downtown Aspen, kicking off two weekends of music, competitions and fun on the slopes of Aspen/Snowmass.

But first, Thursday is St. Patrick’s Day, which means the Lucky Leprechaun scavenger hunt at Snowmass, along with food, green beer and Celtic-themed entertainment from noon to 4:30 p.m. on the mall. Go to www.snowmassvillage.com for details.

Spring Jam begins Friday with a Core Party at the corner of Cooper and Galena in downtown Aspen. Canadian indie group Broken Social Scene will take the stage at 8 p.m. for a free, outdoor concert. The group’s latest release, “Forgiveness Rock Record,” has been nominated for a couple of Juno Award honors (the Canadian equivalent of a Grammy) — Alternative Artist of the Year and Alternative Album of the Year. DJ Naka G will warm up the crowd.

Saturday at 8 p.m. brings the 12th annual KickAspen Big Air Invitational at the base of Aspen Mountain. Top regional skiers and boarders will compete on the big jump. Expect prize giveaways and music.

The free Terrain Park Boot Camp will be open from noon to 3 p.m. on both Saturday and Sunday on Fanny Hill at Snowmass. Aspen/Snowmass athletes and other riders will coach beginners (13 and up) on how to safely slide a rail, hit a box and throw a trick.

Ivan Neville’s Dumpstaphunk brings the funk to Snowmass for a free, outdoor show on Sunday at 4 p.m. in Base Village.

The second weekend of Spring Jam, March 25-27, opens with PEPPER at the base of Aspen Mountain on Friday, March 25 at 8 p.m. Formed in Hawaii, the trio mixes rock with mellow island rhythms.

March 26 brings the Fallen Friends Memorial Event at noon at Aspen Highlands. Costumed teams of two to five will compete on a course of jumps, bumps and park features on Scarlett’s. The Merry-Go-Round deck will be party central. Register to compete at the base from 9:30 to 11 a.m. on the day of the event.

The Helly Hansen Battle in the Bowls begins at 10 a.m. on March 27 at Highlands. Teams of two will race to ski/ride the many bowls of Highlands. Go to www.aspensnowmass.com/battle for registration information.

Wondering about Schneetag? It moves to Aspen Mountain on April 10.

Go to www.aspensnowmass.com/springjam for all the details.