This Saturday at Strike in Prahran, Shaun Belmore and the crew at WetSocks Productions are hosting the premiere for their debut film ‘Spare Change‘. We’re really pumped to see the click-and happy to get behind Shaun and the crew. 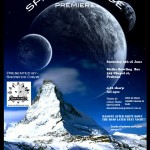 First movie attempt?
Yeah this is my first attempt at a snowboard movie. Ive made edits here and there before but first time ive done something like this. Not sure what the future will hold id definitely like to make another, this year i plan to do a bunch of online webisodes with the crew, but that could change i like to keep my options open for now.

Sponsors or independent?
There wasnt any sponsor money put into the movie apart from my old man’s building company(diamond property developments), when i run out of money he was always really supportive with the movie and wanted it to work so he’d help out to keep the film rolling. Other than that all the money has come from myself.

3 Things to look out for in the movie?

A funny dancing girl, explicit material on a down bar in the park, and you might see a lil bit of snowboarding.

Final words to make us go see it?

I’ts been a long year and its finally coming to an end the premiere this Saturday is going to go off with a bang-Heaps of prizes and giveaways.

To buy a ticket to the premier this Saturday: See the above flyer for all the ticket locations

One Reply to “Shaun Belmore from the the movie SpareChange Talks”