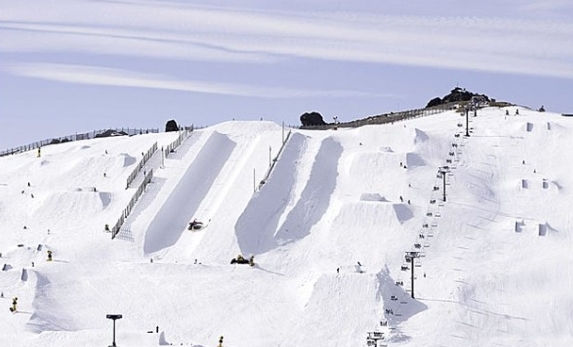 When we talk about the evolution of snowboarding and skiing many cite the changing facets of riding styles as the factors that have molded riding into what it is today. Some would argue that without progression there can be no evolution, and in today’s world much of the progression comes from freestyle riding.

But what if we take a further step back from that? What do riders need to progress? Can it be that riding has come to the level it is at today thanks to the evolution in the resorts which not only facilitate but harness and support that progression? If resort evolution has lead to the progression of freestyle snowboarding and skiing, then Snow Park NZ would have to be considered the revolution which sparked the evolution.

So you’ve lived under a rock and your asking yourself ‘what is Snow Park?!’. To put it simply, its the first dedicated freestyle terrain park resort in the world. A freestyle snowboarding and skiing mecca. 60 hectares of pure terrain park heaven, an entire site dedicated to providing some of the worlds best facilities for freestyle riding.

Snow Park is situated Cardrona Valley, just 35km from Wanaka and 55km from the well known Queenstown on the south island of New Zealand. One fixed quad chair covers the park and although annual snowfall might not be so alluring, 100% coverage by the snowmaking ensures consistently good cover.

Within the park you will find freestyle terrain for all rider types. The park is home to not one but two superpipes. a quarterpipe, numerous kickers of all sizes and a stack of rails and boxes. Sound intimidating? Dont let it scare you cause Snow Park recognises that we were all beginners at one stage, and new in 2007 is the ‘Progression Park’, a dedicated novice park to help riders find their freestyle feet. Not enough to get you out there? Well then how about youth development freestyle program aimed at bringing young riders into the world of progressive freestyle. Snow Park offers a number of different packages developed to suit all types willing to learn.

For those looking to step up, the park offers endless potential to explore the boundaries of your abilities. All elements are kept in pristine condition by a meticulous crew of groomers who will always keep you guessing with innovative and groundbreaking features. Riding brand new lines on a daily basis is not surprising here.

It is this sort of commitment which exemplifies Snow Park’s dedication towards the progression of freestyle riding and is the reason not only novices but the worlds best come to ride this park. And believe me I do mean the worlds best. Snow Park is often a popular choice with riders during the northern summers. And why not when events such as the Burton NZ Open take place at the park.

For those lucky enough to have rode Snow Park, then hearing these words are of no surprise, but for those who haven’t, I have but one thing to say, don’t take my word for it, Snow Park is something you simply have to experience to fully appreciate and understand.

One Reply to “Snowpark, NZ”