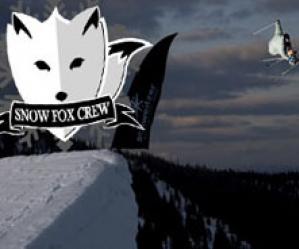 Snowboarding and skiing are extremely sociable activities. Whether it be chatting on the chair, chilling in the park or enjoying some apres-ski its not hard to find people who are keen to have a good time and share a laugh. In fact we found a whole crew.

Snowlife has been keeping up with the SnowFox Crew all season and sat down to chat with the founder, John E Collins. SnowFox Crew are a group of skiers and snowboarders who know how to have a good time and now are bringing the good times to the people.

Q / What is SnowFox Crew all about? When did it all begin?

It all began in May this year when I was starting to get the buzz of winter around the corner. Nothing beats a good old-fashioned Buller house party but they were getting few and far between for whatever reason as each season went on. Something had to be done…

The idea behind the SFC was give the Riders some control when it came down to having fun at the snow. Most of the team are on one mountain or another every weekend so the idea of setting up interesting, progressive features to session, and throwing parties when we wanted to was very exciting. Obviously it’s not all about us, we want the snow community to benefit as a whole from our events and given the “grass roots” nature of the business, I believe that we have the ability to put on events that true snow lovers will enjoy and in-turn so will all visitors to the scene.

Q / Aside from party nights event management, what other area’s do SnowFox Crew handle?

We’re currently organising some demo’s both on the hill at Buller and in Melbourne where we will most likely be setting up some rails, the core of business comes down to us doing what we love and 9 times out of 10 that means getting on the snow and having some fun. If we can pull the strings in time, I’d say keep an eye on September for what looks to be an epic “on snow” event.

We are also keen on hosting as many movie premiers as possible for all our friends out there, September looks like it will be a big month for SnowFox so be sure to stay tuned to our website on up and comers.

Q / Who are the people behind SnowFox Crew?

There are 2 managers, Dave Lock and myself who basically organise the events and plan our season and then the Riders; Christian Sirianni, Watkin McLennan, Nick Breheny, Mikey Williams, Alex Cordingly, Alex Scott, Sam Woolgrove and Chris De Campo. Most of us have all been riding together for years so the team works really well on a whole and each of the guys like to push each other to progress which is always a good thing.

Dave and I try to get the team as involved as they can be when it comes to what we do and events we put on. Putting on something that the Riders can enjoy ensures a great all round experience for anyone who comes to see us. It’s important to us to stay true to the lifestyle of the snow and maintain our grass roots.

Q / How has the response been from the Snow community thus far?

Everybody, both the Buller regulars and Melbourne people seem to be excited about what we’re doing which is very encouraging. We threw a “Meet + Greet” at Avalanche a few weeks back and the response was awesome. I think what most people find appealing about what we’re doing is that we’re no different from them and we all know what a good Mountain party needs.

We’re not trying to be anything we’re not, we just want to enjoy the Mountains the way they should be and sometimes that means saying no to commercialism. We plan to stay true to our “grass roots” business model and always look after the little guy.

Q / We see there is an event going down in Melbourne, tell us about that? What can people expect from the night?

That one should be a lot of fun, we’ve teamed up with ROOM 680 and the “Myplace” guys for the second year of their annual event. The SnowFox boys will be doing a 30 minute demo on the Rails in the car park and then throwing an after party in the front room of the club. Jagermiester, Red Bull, Altitude, Mt Buller and Corona are all sponsoring the event so its bound be a massive one. There’s an open competition for any Riders that want to get up there and strut their stuff.

We have our very own Alex Cordingly aka (DJ DORK) playing from 10pm in our party room where we’re getting out the infamous “Shotski” and playing some ski/snowboard movies. Should be a blast, details below or check out our website. Tickets are $15 and that gets you in, a free “Marky Mark” and enters you into a raffle to win a Snowboard from our friends @ Altitude.

Q / Where can people get tickets to this event?

The SFC guys will be selling tickets and will also have a guest list on the door, better to grab a ticket though as it gets you a free “Marky Mark” and drops you into the snowboard raffle. We will be selling them up at Mt Buller so if you see any long haired dudes in SnowFox T-Shirts, give them a yell and we can sort you out.

Q / Tell us about some of the DJs and artists working with SnowFox Crew on these events?

Our main man at the moment is Alex Cordingly aka (DJ DORK) who has been a part of Buller music for years, anyone who has heard him play a Hip Hop set knows he can get the angriest dude in the dark corner dancing and anyone that has met him loves him. We also have some other Buller bred DJ’s like Ridley Plummer, Charlie Buxton, Jake Zogoolas and I happen to dabble in playing a track or two as well.

We’re looking at working with some of Melbourne’s Rigorous Recordings Crew later in the season and might be putting on a live show or two but that’s yet to be determined.

Q / Being VIC based, any plans for some events up in NSW?

We have a lot of friends over in Jindabyne so absolutely. We want to establish ourselves in Victoria and get some solid stuff locked in on an annual basis first but our long term goal is to get over to NSW and perhaps even New Zealand.

Q / What’s going to be the highlight event for the year? That’s if your ready to let us all know of course!

Right now we’re working on what has the potential to be a massive event not just for us but for the Mt Buller season. I can’t say too much about it case I make some false promises but if all goes well in our efforts then September 5th may be one to pencil into the calendar.

Q / Will we be seeing SnowFox Crew events all season long?

Absolutely, big or small we will be hosting a whole heap of events throughout the rest of the season. If we get bored one week then usually I’ll whip something up in an effort to create that “good, clean, wholesome” environment that we all love so much. At the end of the season we will be hosting some movie premiers thanks to our good friends over at PoorBoyz Productions and Nimbus so make sure to keep an eye out for those.

Q / Thanks John, anything further you wish to add?

Our website will be finished this week so check it out when you get a chance, it has all our info and event dates on it.

The Rail Jam @ ROOM 680 should be heaps of fun so try and get down at least to see the SFC boys do their thing. Tickets are available from any of the SFC Riders and Managers.

Hope to see you all there!!

Thanks Nick from Snowlife for taking an interest in our mission to have fun!

For more info on SnowFox Crew and upcoming events check out www.snowfoxcrew.com or even find them on Facebook.