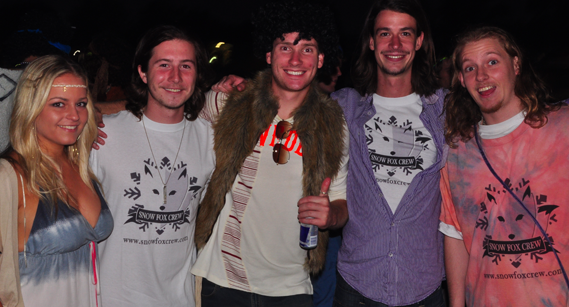 Last season we caught up with the guys at SnowFox Crew, a group of dedicated skiers and snowboarders based out of Mt Buller who were taking life one party at a time. 2009 was their year of inception and what ensued was a series of snow related events hosted by the Crew around Melbourne and Mt Buller. The guys definitely knew how to put on a social gathering. Since then (a mere 12 months on) SnowFox represents far more than just Event Management and we caught up with founder and managing director John E Collins, or JC as many know him, to find out what 2010 will bring.

Q / We last spoke to you during the ’09 Winter, what was the highlight of the season?
I’d have to say the Poor Boyz Premier we held in September was our favourite. It was great to see a great bunch of people get together for purely the love of the sport and to get a first look at the new and improving talent from the Northern Winters. We had an interesting year as we we had just started out and were testing the waters as to what we could do and where we could take SnowFox, what worked, what didn’t work etc.

Q / Overall thoughts on the season?
Would have been great to see some more snow but anyone who rides in Australia finds themselves saying that almost every year. Still a lot of fun as always and we finished the season super excited to get started on the next. Some of the Crew had some great successes in competitions and overseas so all in all a pretty positive season.

Q / Any new additions to the team in 2010?
We do! Anna Segal joined the crew at the end of last year and has been riding up North ever since so were very keen to hear some stories and see some shots from her trip when she gets back. Conrad Lucas joined us a few months ago when he got back from “The Camp” and has been progressing quickly into a pretty steezy young Rider so again very keen to have a shred with him amongst the Crew this season. We may have 2 more Riders joining the team before any more snow hits the ground this year but we’ll have to see how things pan out.

Q / Have much of the crew spent their summer riding overseas?
I think I’m the only sucker that hasn’t had a ride over the summer break. A few of the Crew are still out in the wild and coming home soon after massive Northern seasons. I know Mammoth, Breck, Niseko and Tahoe have been some of the hot spots for our foxy riders, starting to wonder if their ever coming back.

Q / It’s been busy back at SnowFox HQ by the sounds of things, where have the SnowFox Crew expanded into for 2010?
This year we’re launching SnowFox Productions which is pretty exciting for us as its something a lot of us have wanted to do for a long time now.  I’ve spent some time pulling together a great Production Crew that are all anxious to get some footage down and start something great. I can say that we’re looking to film a Web Series and if we have the time a Film as well so I definitely can’t wait to see what the Production boys can do.

Q / Any events locked in you’d like to share? How will SnowFox welcome in the 2010 season?
We have a super busy Calendar this year, stepping it up quite a bit from last year now that we’re organised and prepared for the season. We’re working very closely with some of the University Ski and Board teams now, specifically MUSKI and MUST in order to really push for some great event concepts and a big vibe.

One of my favourite event concepts for 2010 is our season opening party called “Arqunaq” which is native American Inuit for “Snow Dance.” The  idea is to start the season by praising the Snow Gods for some good Snow for the year by some crazy rituals and some eccentric music. BYO musical instruments such as congo drums, plastic horns and anything that will cause a ruckus.

Q / The crew is mostly based in Buller, right? Will we see some more events taking place in Melbourne or even other major cities away from the snow during 2010?
At the moment the Crew is all Buller, we’re looking at some options to maybe start a new Crew in NSW but again that’s something we’re not going to rush. This year we’re taking the Poor Boyz Premier to Sydney so our friends from the Northern Mountains can get in on the action which will see the start of us throwing events in NSW.

We have a lot going on in Melbourne around 6 or so events for the city slickers and Uni students and of course any of the all mountain crew that can make them. More movie premiers, more loose snow parties, more fun.

Q / Moving into Production – how did this come about?
One thing that I think a lot of people in the Australian Snow Scene will know is that its pretty difficult to get great exposure for Riders, we wanted to try and push the Industry to recognise more of the talent coming from the Mountains and of course put together some funny, exciting and interesting footage that hopefully people will enjoy.

Q / What can we expect from the Crew, a feature production, webcasts, video blogs?
We’re looking at producing a Web Series and a Film in 2010 as well as some other random edits for fun. Essentially we want to capture the lifestyle around Australian Snow Sports as its fairly unique. There aren’t many Snow Fields in the world that go through the same conditions as Australia’s. I think it really shows a great level of commitment to the sport when riders are rock hoping and tailing over grass patches with a smile on their face. A pretty crazy level of love for the ride can be found on Australian Snow fields and its something we’re a part of and want to portray.

Q / What are you most excited about for SnowFox in 2010?
There are a couple of events that we’re waiting for final permission on that I can’t mention quite yet but if they go through then ill be pretty psyched. Other than that, I’m really keen to see what the Production team can do and how some of the great ideas that we have come together. It should be a great contribution to what we’re trying to achieve with SnowFox.

Q / Final words?
Keep an eye on our website (www.snowfoxcrew.com), the Riders will be putting up some stories from their trips overseas and we have a serious number of fun events planned for the year so try and come along to them. Most of all Pray for a big Dump!!!

One Reply to “Catching Up With The SnowFox Crew”