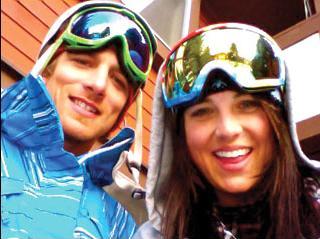 Competing in whiteout weather, where athletes are unable to tell which way the snow is falling, Ty Alexander and Megan McClintock represented Fresno State at the United States Collegiate Ski and Snowboard Association Nationals competition in Idaho last week with both placing in the top 15 based on overall scores in each of their respective sports.

The duo is part of an unofficial competition team formed by Alexander last year. In contrast to the current Fresno State Ski and Snowboarding club, which Alexander is also a part of, he wanted a more competitive aspect than what the club was currently offering. So he began participating in snowboarding competitions on his own last year, speaking to others in the club about joining him to form a team.

“I started by myself last year,” Alexander said. “I traveled to Mammoth and competed by myself, went to nationals by myself. Last year nationals were in Maine [and] I placed 16th overall.”

The experience of competing and participating in Nationals intensified Alexander’s passion for the competitive aspect of his sport. When school started again in the fall of 2010 Alexander again sought to encourage and recruit more students to his team and one of those new members was competitive skier McClintock.

“He did a little presentation at the ski and snowboard club meetings,” McClintock said. “There’s a lot of kids there. I’m surprised more didn’t join.”

The duo and their nine teammates currently compete in the Southern California Collegiate Snowsports Conference with competitions mainly held at Mammoth Mountain. In a conference that currently has 11 teams with three additional schools soon to be added to its roster, the students representing Fresno State are currently the only ones not to be school-sponsored. However, Alexander is looking to change that in the next few years.

“We just want more members of the Fresno State Ski and Snowboarding club to compete with us, so we can have a bigger, established team,” Alexander said. “Half of the teams at nationals were varsity and backed by their schools.”

Based on their performances this season in the SCCSC competitions, Alexander and McClintock were qualified to participate in nationals this year and go up against athletes from more than 150 schools nationwide.

The week-long event took place March 8-12 in Sun Valley, Idaho where Alexander placed 15th in the overall snowboarding scores. That score was a compilation of four events: Cross, Halfpipe, Slopestyle and GS.