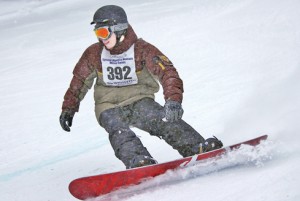 Cody Cardwell might just be the best snowboarder around.

Cardwell was the only athlete representing Libby at the games. He works at Achievements, Inc. at the Parkside Thrift Store and Kootenai Clothing Creations. He is the son of Kevin and Mary Cardwell.

“We are very proud of his snowboarding accomplishment and always encourage and support Cody in other outdoor activities like wake boarding, kayaking, mountain biking, hunting and fishing,” Kevin said.

Cardwell started downhill skiing at age 7 during a special education field trip. He switched to snowboarding seven years ago after being influenced by his older sister, Kerry. He has been practicing all winter at Turner Mountain.