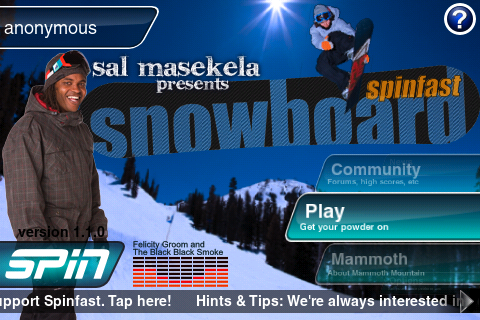 The face of action sports Sal Masekela has teamed up with Perth based Aussie developers Spinfast to create an exciting addition to the array of snowboarding games available on the iTunes App store.

Entitled Snowboard with Sal Masekela, available on both iPhone and iPad devices, the game immediately immerses you into the snowboarding world of Mammoth Mountain, California, USA. Delivering some excellent imagery on introduction, Spinfast successfully captures the imagination of any snowboard fanatic but perhaps conversely sets a strange tone with the sound track selection.

Despite being contained to just Mammoth Mountain, Snowboard with Sal Masekela announces itself as a game with X flavor comprising 4 extreme event options: Big Air, Superpipe, Boarder Cross and Slope Style. Depending on your style, you can choose to ride as fictional character’s Dylan, Jake or Roxanne, all of which feature unique appearance, boards, tricks and characteristics. The choice is key when ripping out one of the huge range of trick variations available to you.

The wonderful thing about Spinfast’s Snowboarding is the attention to detail and its use of the iPhones accelerometer motions. The accelerometer movement is crisply translated into steering the snowboarder so immediately you get a sense of synergy with the character you are launching down the slope.

Unfortunately the synergy isn’t so apparent when executing the great range of tricks available. There are moments of inertia in the air that are particularly frustrating, except perhaps when your character face plants which is quite humorous. The aerial board balance is equally hard to grasp at first, but when you start to get a sense of the calibration the real intentions of the game start to emerge. 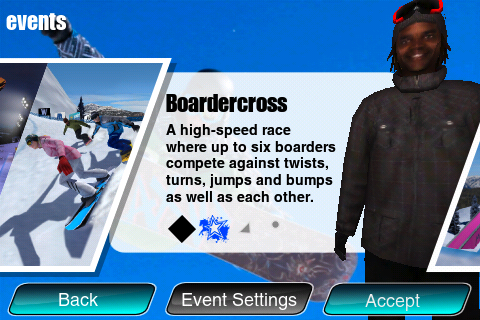 Once you start to get a grip on the controls and rotations the opportunities seem infinite. The detail in the trick library is amazing, where most hand held games slip into the motions of basic gaming this one takes it to the next level. Similar to its big brothers in the console would, its all about the combinations of rotations, flicks, single hand grabs, two hand grabs, nuclear, cannonball, mute, backsides, tailfish and it goes on and on. Although the learning curve is steep at first, mastering the combinations is satisfying and provokes enough ongoing interest to overcome the lack of unlockable features and non existent career modes.

The scoring system is generous and stingy simultaneously. If you pull off a sick combination in the pipe or launching off the big air you will be handsomely rewarded for it in the points department, but at the hands of the developer you will be stripped substantially if you bung your landing. Unfortunately that is more often than not, due to the tricky notion of the aerial board balance. 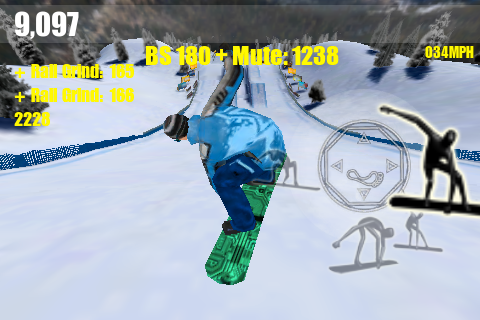 Across the board the gameplay and menu system is professional and abundant with attention to detail. Generally this works in favor of the game, but perhaps lends itself to a learning curve beyond what the average iphone user hopes for. If mastered, the game can indeed be addictive and rewarding.

In stark contrast to many games on the market for iphone this one has a particular sparkle. Spinfast have produced a visually strong gaming experience which can easily immerse you in the environment of the great Mammoth Mountain and is almost comparable to the quality and terrain detail of a snowboarding console equivalent albeit a small sense of terrain model and background dislocation at times. 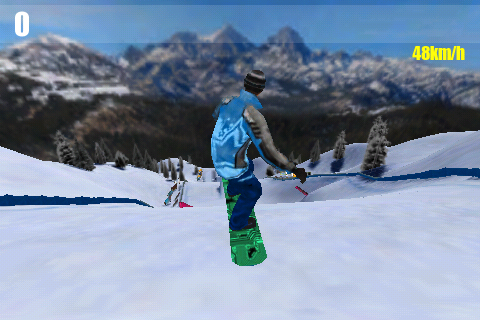 Day or night the environmental depth on the screen combined with brilliant color definition is a great visual. Spinfast have purposely kept the game play screen real estate as open as possible so the user can use the whole screen to navigate the boarder down the slope.
The aerial trick controls have been equally crafted in such a way that they clearly display the trick or grab without disrupting the visual aspect of the game. With the addition of a few more view perspective options whilst shredding the slope, I think the visual aspect of the game would be close to flawless.

What else is acutely unique about this game is the detailed animation of the snowboarder actions. Each trick, spin, flip or grab has been carefully animated and translates clearly on the small iphone screen as you execute the tricks via the controls.

Its quite disappointing to say, but the sound track is all but non existent. Only a two track rotation spins in the background and its a questionable selection to say the least. Not to say the quality Perth based Felicity Groom and the Black Black Smoke band is anything to sneer at, but perhaps a wider range of rotations would benefit the game. Fortunately if the rotation starts to irritate you after hearing them 5 or 6 over, you can mute the band. If only we could make use of our own library of tunes.

The humorous commentary throughout the menu system by Sal Masekela is where he and game start to develop character. Masekela gives us a run down on everything from events to hints and shows his true hosting talents along the way.

The game itself is relatively confined in the sense that there is no levels and only a small selection of events to challenge yourself on. Having said that the developers haven’t just focused on the game, they have topped up the app with a host of community forums, Mammoth Mountain news, weather, lodging and even Sal’s pro tips.

Fortunately the game allows you to create a profile, so any records are saved and can be submitted to a community forum, although this is the only competition you will face due to the lack of bluetooth or wifi connection for simultaneous play. 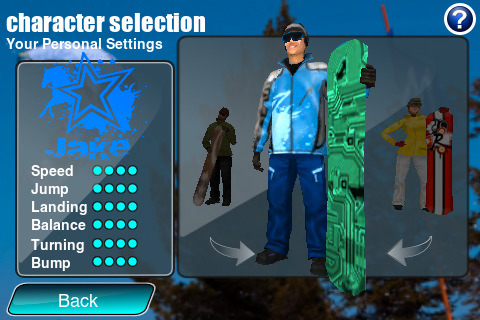 A notable feature which caught my attention was the replay option which becomes available once your ride has come to an end. Many replay options in hand held games only show the same view as per your gameplay perspective, however Spinfast Snowboarding has taken replay to the next step by providing a replay that includes various perspectives and close ups. So if you really pulled off a gnarly run, then you can go back and watch it again, but the developer has stopped short of allowing you to save or upload the video. Hopefully a feature in future versions.

Summary:
The first impressions of Snowboarding presented by Sal Masekela hold true right through to the conclusion. Its a game full of character, class, terrific graphics and a solid gaming experience. It presents a challenge in its learning curve, but only if you want to master its full potential. For AU$2.49 its well worth the addition to your app library and in typical Spinfast fashion they will continue to improve it.

4 Replies to “Snowboard with Sal Masekela”