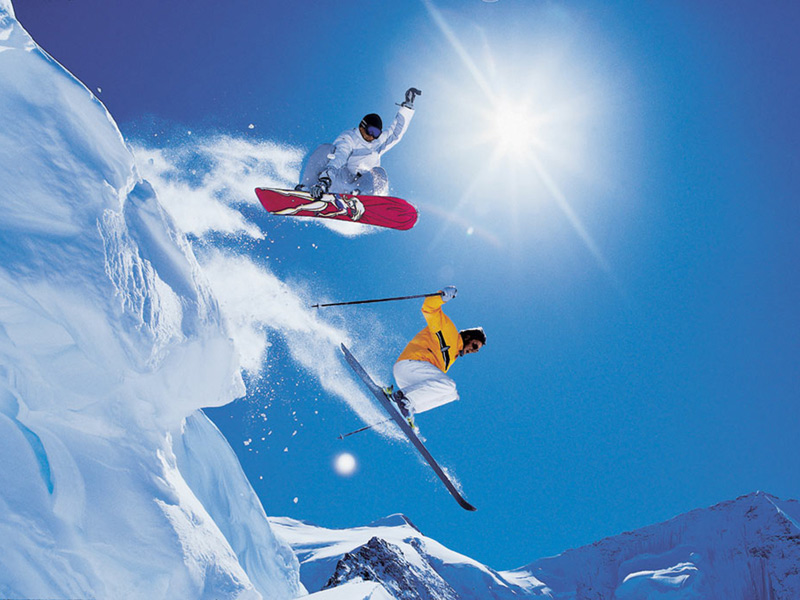 People often compare skiing with snow boarding, but as I see it there is no comparison between the two. Both of these sports have quite different backgrounds and history; neither snowboarding is a subset of skiing, nor the condition other way round is true. The comparison probably arises due to fact that both the sports share the same snowy environment and both give one hell of a good time to remember. Let’s have a close look on each of these popular snow sports separately.

The concept of skiing was derived from snow shoes. The concept was developed to provide faster means of transportation by attaching long, narrow wooden planks. Early skis were tied to the toe of the skier shoes (but not at the heels); this style of skiing is called Nordic Skiing. Alpine skiing used skis that could be attached to skier’s toe as well as to his heels providing over more control. The skiing tradition grew as skiers learned to control their speed and make sharp turns. It became a formal sport when the first official skiing event was held in 1800’s and became a part of Winter Olympics in 1924.

With the steady rise in popularity of skiing, a number of innovative designs have been introduced like wooden skis were replaced by skis made out of stiffer material. Leather made snow boots replaced plastic made boots. A number of safety measure have also been introduced to protect the rider incase an accident occurs.

In contrast to skiing, snowboarding is a subset of sea surfing and skateboarding. sledges have long been used since the time of cavemen as a means of faster transportation over snow; snowboarding seems pretty similar so we can say that snowboard is a modernized version of a sledge.

The modern idea of snowboarding was cooked up by Sherman Poppen with the invention of the Snufer (first time for his daughter). Since then the popularity of snow boarding has been growing and continues to grow. Snowboarding was recognized as a sport in 1986 and later was also made a part of the Winter Olympics.

Early snowboard (the Snuffer) was simply two skis tied together with a rope attached to the nose for balancing the rider. In order to provide a firm grip, permanent feet bindings were introduced. This also provides rider ease and protects the foot joint while jibbing or performing other stunts. Use of knee, elbow pads and helmets has also become common among boarders.

A survey shows that youngster prefer snowboarding more than skiing probably because snow boarding (skate boarding and surfing as well) get more media coverage than skiing. But for those who like to show the wind how to fly, popularity of skiing has surpassed snowboarding.

Now the choice is yours, either way get yourself out there and enjoy the mountains. Happy riding.