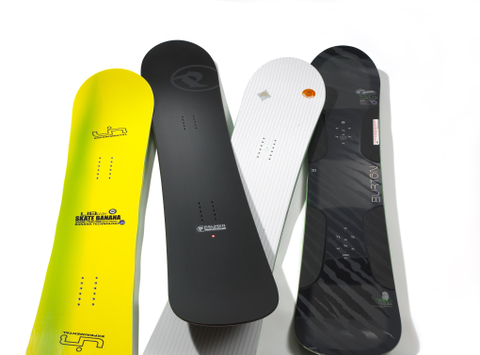 A common mistaken belief held  by many snowboarding novices is that there is only one kind of snowboard, novices seem to think that one board is sufficient for all sorts of terrain and weather conditions. Nothing could be further from the truth, the reality is there are a wide number of different snowboards available, and whilst there are variations in design, construction and price snowboards tend to fall within three broad types or categories. These categories are as follows.

Carving snowboards typically tend to be much more narrow then their freestyle and free ride board counterparts, and their narrow nature has been specifically designed so as to better facilitate smoother turning and greater ease of turning for the user.

Carving snowboards are also widely recognised for their precision in turning corners, increased speeds and also a minimal of disruption in the momentum of the boarder should they falter or lose their balance.  Because of this uncanny level of precision and control, carving snowboards have found themselves especially popular among competitive and professional snowboarders.

Carving snowboards are instantly recognisable as a result of their highly unique design, they look like an elongated ski, and it is this design that distinguishes them their free ride board counterparts. Carving boards are more suited for advanced snowboarders, yes, they do offer unrivalled levels of control and precision, however novice snowboarders simply do not have the confidence to most effectively utilise such boards. Carving snow boards are not at well suited for tricks, instead should be reserved only for use riding and carving downhill.

Freestyle boards tends to be wider and more welcoming to the novice users than the carving snowboards, and has a much softer flex which makes steering and turning easier. Freestyle boards are typically the board of choice for novices, thanks to their combined balance of steering and low impact.

Free ride Snowboards are usually fairly soft and manoeuvrable enough for novice boarders, but stiff enough to hold a fast turn in hard snow, which is not something quite so readily afforded with the freestyle boards.  However, it isn’t as stable as a carving board and it isn’t as agile as a freestyle board.