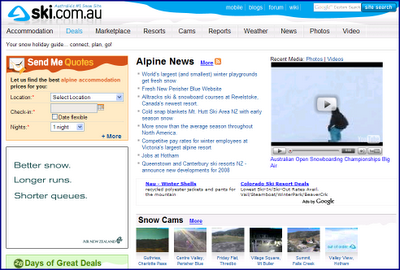 Over the many years there have been certain things that have stayed true to the snow industry in Australia. These things have developed over time to become institutions to our sport. Ski.com.au is no doubt one of them. From their humble beginnings to where they are now, 14 years on – it is still going stronger than ever.

Not long ago, Snowlife had the chance to catch up with Ian Dunlop of Ski.com.au to find out why they did it, how they did it and whats left to do.

Q / When was Ski.com.au first launched and what was the motivation behind its development?

We first launched the site during the 1995 snow season and the primary motivation was so that I could get a snow report in Newcastle! Back then the only way to get a snow report was to get the Thursday night news clip or radio call in or visit your local ski shop to look at the daily fax. We figured we would get the daily faxs and put them online so anyone could see them. It was a hobby and it sort of grew from there.

Q / Given the name is Ski.com.au, whats your spin on the skiers vs snowboarders debate?

In hindsight snow may have been better than ski but at the time it was set up it was in collaboration with a local ski shop which had ski in its name. At that time you had to show some affinity to the name to get the registration so we used the shop which had ski in its name to get the domain. There is no deeper meaning than that and I see the debate between skiers and boarders as about as insightful as ford vs holden.

Q / Who are the people behind Ski.com.au?

There are 3 of us.
– Ian Dunlop, I do the programming and make things work. I am also the face of the site on the forums.
– Richard Tribe, he does a lot of the admin and customer support. Richard is more of the face of the site to the industry.
– Peter Bradica, he is the graphic designer and makes my stuff look great. Peter prefers to remain totally faceless!

Q / Over the years, what has been Ski.com.au’s greatest success?

Without doubt our biggest success has been engaging with the public. That has taken many forms and a bit of bribery on our behalf to make it happen. The snow cams were the carrot to get volums of people to the site but once on the site we had to engage them and keep them there. The community aspect of our site – forums, public reports, photos etc all helped that and we are looking at ways to extend that engagement.

Q / Aside from News and weather, what else can visitors find on the site?

Obviously snow reports and cams! We offer official and independent and public reports so a bit of everything there. There is also a passionate community that will offer opinions on just about anything. On top of that we have an extensive accommodation listing service which includes real time bookings up to 3 months out and a dynamic marketplace to buy and sell gear.

Q / Tell us about WikiSki, what are the motivations and focus behind this aspect of the portal?

Wikiski came about from the forums. Basically we would see the same topics discussed over and over again and the nature of a forum saw the threads dissappear and then reappear later as people asked the same questions again. We figured a permanent repository of all things snow was a good idea and several members of the community have really rallied behind it. It is a slow burn project that we are happy to let steadily grow with time.

Q / How important has social networking become for the site? Where can people find you?

Our forums are really the core of this and whilst somewhat “oldschool” still caters for much of our users needs. We offer widgets etc that can incorporate some of our data into facebook accounts and we have a twitter site to keep people up to date with breaking information. It is certainly a growing area and we are exploring other options as well but it does come back to the fact that there is only 3 of us and all decisions have to be bound by will it pay for itself? We all have families to feed afterall.

Q / Tell us about real time weather information and the importance you place on it for your users?

Real time weather is a bit of a niche product. If you are sitting in Melbourne or Sydney then knowing the temperature right now at a resort isn’t so important to most people. What they are interested in is what is happening in the next few days. What will happen before their arrival or during their stay. To that end we have extended our 7 day forecast to 14 days this year and so far it is proving quite popular.

Q / The forum’s are a great way for skiers and boarders to converse with one another, what has been the strangest theme you’ve seen in one of your forums?

Probably the strangest thing was “Magellagate” as it has become known. A user (Magella) began posting and developed quite a personality on the site over many months. She seemed very personable and a lot of people considered her their friend. Many people thought others had met her face to face but it panned out that no-one ever actually met her. One day she apparently became terminally ill which came from a txt from her to one of the other users ultimately she “died” of a brain tumour with that information coming from her “sister”. At first there was much sorrow on the forums and then a few suspected things weren’t quite right. Between the forum members we have contacts in lots of places and death records were seached for and it panned out that no-one matching her apparent age had died of her apparent symptoms in the time frame supplied. It was evident that the entire thing (from existence to death) was staged. To this day we still don’t understand why, if it was some type of phycology exmperiment for a PhD student or someone just having fun.

Q / What’s the greatest challenge about running a successful website?

Trading off what is cool to what pays the bills. We have lots of ideas of “wow that would be cool” but then we sit back and ask what revenue we will generate? We have to provide services that the people want to use but also that will generate revenue to pay the bills.

Q / Aside from the website, what other ways does Ski.com.au get involved with the snow industry?

Not a lot really. We are based in Newcastle which made sense when we set it up but it is too remote from the industry to actually be involved in it in an on snow way. We do co-ordinate data feeds on behalf of the industry to get snow reports out to a wider audience and we did install the snow-cams at the outset which many consider to have revolutionised snow reporting in this country. However in terms of on snow activities we don’t actually have a lot of involvement. Our biggest involvement is in pre trip planning and post trip analysis and sharing for the public.

We are going mobile. Our iphone portal is in the throws of being launched right now.
http://m.ski.com.au

It is a cut down version of much of the content on our site, certainly cams, weather, reports, news, accommodation and a few other odds and ends. Naturally this is version 1 but it will grow and improve in time.

With 14 years experience dealing with the public on what they like and dislike about the resorts and how they operate and the industry in general I think we have a pretty good understanding of the publics views on the snow industry. This hasn’t been garnered via any carefully constructed market surveys but literally listening to the thousands of people that share with us over the years day in and day out and watching how our website is used. I think we have a good understanding of what is driving the average snow lover to head overseas and what would get them back to the snow in Australia. However we don’t run the resorts here and don’t have any say in it so I guess it is our little secret