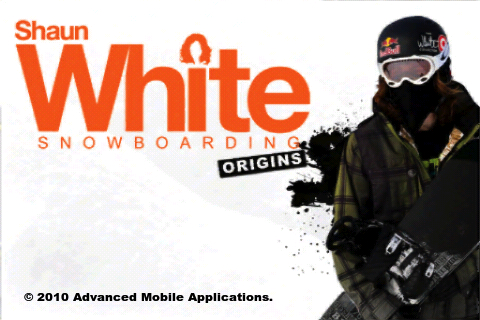 The game is a great take on the Shaun White console series, capturing most of the award winning features and stuffing them into a hand held version for the iphone.

With some nice use of the iphone graphics, accelerometer and touch screen the games threads you down slopes from the likes of Japan, Chile, USA and Spain. Depending on your preference, you can chose to ride as one of 5 available characters all of which feature in the console series of the game. Each player character has their own unique set of controls, trick and speed characteristics. So when you are hitting the slopes to set about pulling off ollies, flips, grabs or another one of the 50 or so tricks you will have the right balance of characteristics to suit your style.

One of the most prevalent things to look out for in any game is how quickly a user can pick  up the gameplay. It can be the make or break of many games, and in this instance its the maker.

The first noticeable exclusion from Shaun White Snowboarding: Origins is the lack intricacies when balancing on the board which is the first major hurdle of any snowboarding or skateboarding game. Balancing has been totally removed from all game play which allows the slope navigation and tricks to prevail as the purpose of the game. Surprisingly enough I don’t miss the balance struggle, perhaps even more so when you are confronted with a screen full of options for grabs, flips, grinds and host of other objects to negotiate on the slope.

The introduction and menu is swift and intuitive once you get passed the frustrating self promotion of the developers. Its a matter of play on your own or play online and then selecting what challenge your mood dictates. Leisurely free ride or time and trick challenges. To compensate for the games lack of career mode, the developers will force you to unlock challenge modes along the way. 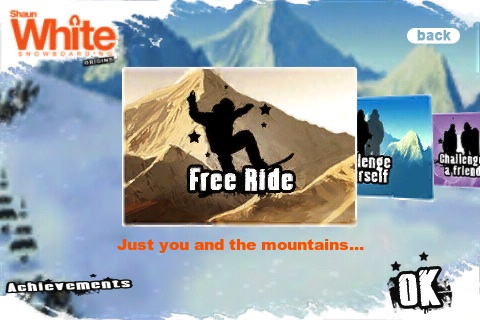 Once you’ve chosen your challenge, character and destination you will hit the slopes in relatively quick time providing you are on 3GS and above. Anything below the 3GS model, the gameplay really starts to slug it out in screen jolts.

The developers have done a tidy job of providing loads of information and user controls on the screen without clogging the small bit of real estate available. Unlike other comparative games, the gaming experience takes precedent over an array of control methods.

Simply by tilting the screen in any direction, your character will follow your every tilt to navigate the slopes. A good sized speed button is also situated in the bottom right corner of the screen so you can get your character a good run up approaching the jumps.
An upward snap of the wrist or tap of the speed button will launch the tiny snowboarder off the end of the jump in preparation for executing one of a huge bag of tricks. Its at the point of being airborne when the tricks palette arrives on your screen. On the left the D-pad or iphone tilt sends the boarder into a spin or flip. Over on the right an image of a board allows you choose a grab point to combine with a spin of flip. Do as many tricks as you can in a short space of time and you will earn points for your hard work. Combinations of tricks adds bonus points which encourages you to run amuck in the air. 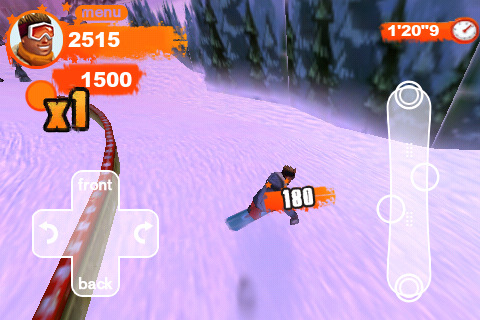 Generally the gameplay is dead easy to pick up yet provides a solid degree of challenge to make you come back to it again and again. Warning: It is slightly addictive.

To say the iphone offers one of the finest game play screens on the market is quite an understatement and to compliment what the phone offers, Ubisoft and Advanced Mobile Applications have done a sensational job graphically. The game at times shows glimpses of untidy terrain modeling but is generally rich with color, 3D depth and a terrific sense of the alpine environment whether you are riding the slopes in the light of day or the darkness of night.

The most notable feature of the graphics is the iconic balance of realism and arcade banter, combined with the caricature nature of the boarders. Typical throughout all of the Shaun White console game series, the style has translated perfectly to the handheld installation. 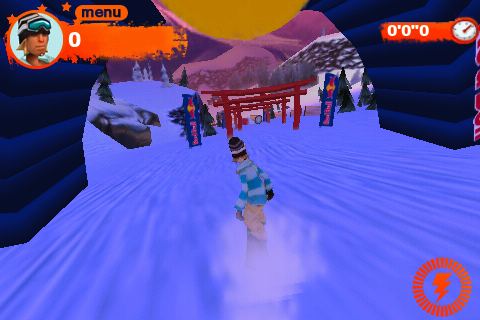 I don’t know what it is about these snowboarding,surfing, skateboarding games… The developers either get the sound track and sound effects spot on or ruin the game altogether. Unfortunately Shaun White: Origins has fallen horribly short of providing anything remotely close to listenable. The sound effects are comical and coincide with arcade nature of the game, however when rolled up in a spinning track with emo rock its quite hard to swallow.

My suggestion would be to jump straight into settings: turn sound effects up and music down.

Features
Despite the lack of career mode the game has inherited a good bulk of unlockable content/ As you progress you earn the content such as real-life snowboarding footage of Shaun White, new stages and challenges and various other achievements.
Combine that with ghost mode which allows you to record you best runs and share them with your friends so they can challenge you in gameplay and visa versa.
Twitter and Facebook connections bring out the social aspects of this game, making it irresistible to not post and brag about high scores on the various leader boards.
The OpenFeint network integration is what brings this little package together, opening its doors to the huge world that is OpenFeint.

• No career mode or time trial. Critical once you have unlocked everything
• Multiplayer ability over bluetooth and wifi is lacking
• Under whelming choice of courses

If you are expecting the same experience as the console version of Shaun White Snowboarding then you might be disappointed, but if you’re not then you will be pleasantly surprised. Its a great little handheld version of the game and a must for all snowboarding fanatics.