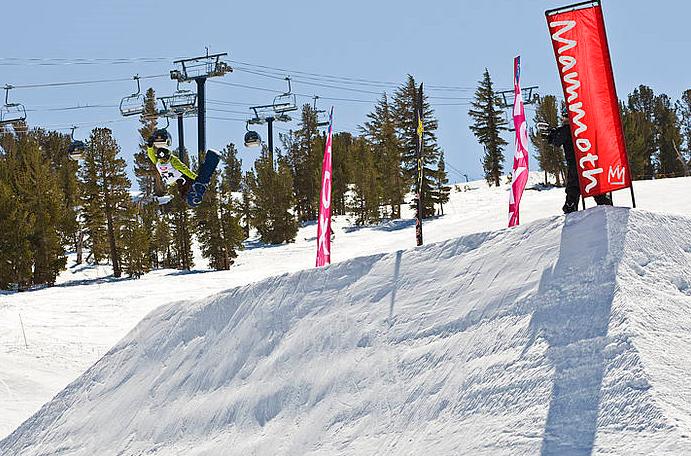 With men’s TTR World Champion crowned, all eyes are on the 6Star Roxy Chicken Jam taking place at Mammoth Mountain, California from March 26th to March 27th, 2010.  This is the last major Swatch TTR Tour stop for the women and will be the event that will decide who claims the women’s 2009/2010 Swatch TTR World Snowboard Champion title.  After some amazing weather and top-notch riding at the US Open last weekend there were drastic changes in the TTR ranking that has setup opportunities for a few women to take the TTR Champion title and one of the Top 3 finalist positions.

It All Comes Down to Eight Ladies Who Have a Shot at the 09/10 Title
It has been a long season packed with events around the globe. There are only eight out of the women set to compete at the Roxy Chicken Jam who have strong enough TTR results in both slopestyle and halfpipe to take home the 2009/2010 Swatch TTR World Champion title.  After a great showing at all major slopestyle events this season, young Finnish rider and current TTR World No. 1, Enni Rukajärvi, will need to defend her tour lead with two good results in Mammoth.  Hot on Rukajärvi’s heels is Swiss rider, Sina Candrian, who has an opportunity to pull ahead of Rukajärvi if she can put down some good runs in the halfpipe.  Norwegian rider, Lisa Wiik, has been having a good season and has the well rounded skills in both halfpipe and slopestyle to make some moves this weekend for a shot at the tour title.  Known for her smooth style and large airs, Sarka Pancochova (CZE), will be in attendance and is sure to be making a run for the top  spot in the TTR world ranking list.  Other riders scheduled to be in Mammoth for the Chicken Jam who also have a fighting chance at the TTR World Champion title include Ursina Haller (SUI), Shelly Gotlieb (NZL), Kjersti Ostgaard Buaas (NOR) and 07/08 TTR World Champion, Jamie Anderson (USA).

The Stage is Set for An Interesting Showdown in Sunny California
With the Swatch TTR World Champion title still open for multiple riders to claim, it’s going to be a nail-biter of a weekend in Mammoth.  The forecast is calling for sunny skies and talented riders from around the world will be in attendance as these women compete for some serious cash.  Not only will the top finalist/tour winner claim the prestigious TTR World Champion title and $50,000 USD, but the ladies who are lucky enough to secure the World No. 2 and World No. 3 positions will be awarded a part of the $200,000USD TTR prize purse. All riders who finish in the TTR Top 3 will also receive automatic invites to all major TTR events in the 2010/2011 season.

Check ttrworldtour.com for Fresh News, Updated Rankings and Videos
With the male Swatch TTR World Champion crowned last weekend at the Burton US Open, the next finale is just around the corner. All the action kicks off on Friday March, 26th 2010, and wraps up on Saturday, March 27th 2010.  The TTR World Champion awards ceremony will be held on stage in the Mammoth Mountain main village followed by a performance by musical guest N.A.S.A.  If you can’t make it to Mammoth for the event head to www.ttrworldtour.com for ranking updates, news and videos straight from the Chicken Jam.