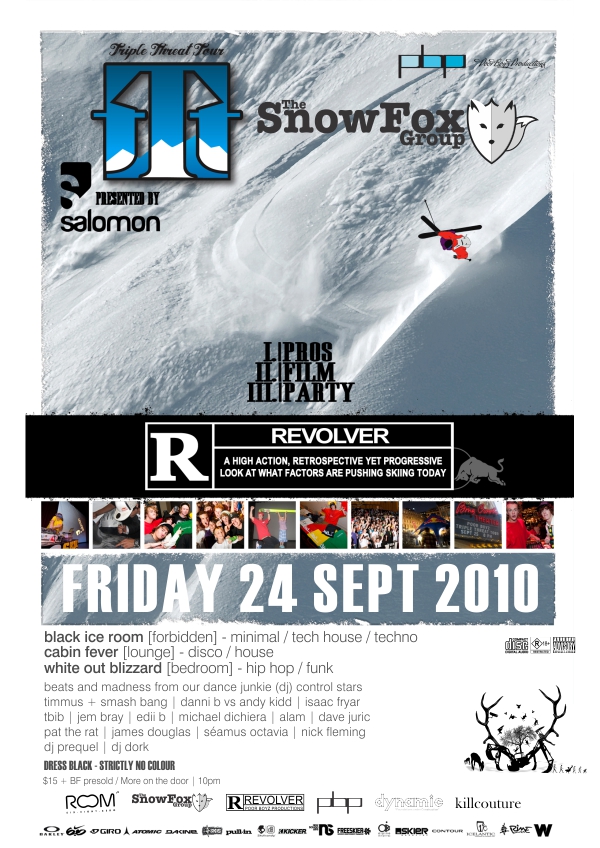 Our good friends over at Snow Fox Crew shot me the details of a premier night they are hosting soon for Poor Boyz Production 2010 release of ‘Revolver’. The flick looks pretty epic (check the teaser below) and the Snow Fox guys know how to put on a party so put this one in your diaries guys! Check out the details:

Finally! The long anticipated movie event of the year has arrived…

As part of the Poor Boyz Triple Threat World Tour, SnowFox are proud to present the Melbourne and Australian Premier of “Revolver.”

When: Friday 24th September at Room 680 on Glenferrie Rd in Hawthorn.

Tickets: $15 available at www.snowfoxcrew.com/store which gets you the flick, a drink and into the afterparty.

Here is your invite!

SYNOPSIS
Revolver, the 2010 film from Poor Boyz Productions, presented by Salomon focuses on the progression and the factors that have coincided with many great advancements of the sport of skiing. (Over the last decade skiing has exploded into what we know it is today. But skiing has had many trying moments long before the end of the 20th century.) This season Poor Boyz Productions plans to showcase today’s raw talents of skiing in a high action, retrospective, yet progressive look at what things are pushing the sport today.