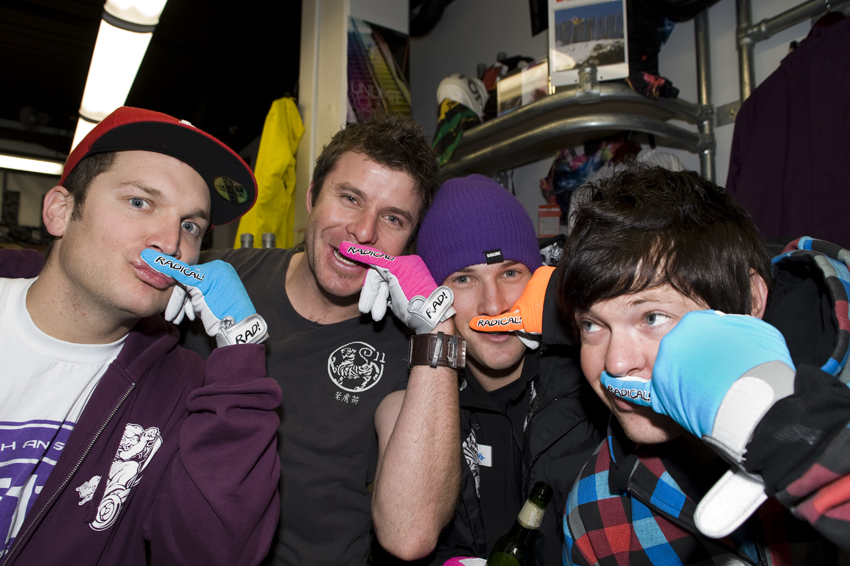 There is no doubt snowboarding take style to a new level. We always want the latest season’s gear but who can blame us when new designs feature each year, you just have to stay on top of the trends! At least now you can stay on top without breaking the bank and its all thanks to a Aussie company revolutionising the snowboard glove industry.

Radical! Gloves is all about affordable steeze. Delivering the look without sending you broke. Getting the job done without taking a second job. Snowlife caught up with Jeremy Burns of Radical Gloves to talk affordable steeze and living to get Radical!

Q / How did Radical! Gloves take off?

Radical! Gloves officially launched at the end of June 09′. There has been a lot hype amongst the community and everyone has been uber supportive which is vital in the success of the company.

The ‘Spring Break Glove’ comes in one size which is a large. It’s designed to fit the average hand, but can handle a little bigger or smaller too. They glove comes in 6 rad colours so there’s something to suit everyone. It’s made of genuine pig leather and has a breathable nylon/spandex backing. The wrist is adjustable and the best part is they’re fully Hi Five-able!!

Q / What conditions are they best suited to?

The gloves are ideal for the start of the season and the end of the season. The Radical! team is still riding in theirs mid season! They’re ideal for spring time and when it’s warming up a little in the park..

Q / Talk us through the motivation behind the designs?

The design is very basic.. An average pipe glove in Australia retails from around 80 peanuts and can even go up from there. The whole idea behind Radical! Gloves is ‘AFFORDABLE STEEZE’. They’re simplistic designs that still look rad and aren’t gonna steel all your beer money.

Q / Where can someone pick up a pair?

We’re currently in 10 stores throughout NSW and VIC.

Hopefully a couple more shops soon so they’ll be available at every mountain!

Q / How much are they? How is it they are so affordable?

The Spring Break Glove retails for $35. Australia needs a cheaper glove that still works and looks rad, that’s how.

Q / Is there a Radical! team? Are you looking for Radical riders?

The Radical! Team has been put together over the last couple weeks. We’ve been scouting and come up with some perfect candidates. The RAD program is all about hooking up nice kids who love to ride. We’re looking for a couple of NSW kids who might meet the criteria and would be stoked to hear from anyone interested.

So far the Radical! Shreds are:

On the local scene in Falls we’ve also got some epic skiiers getting Rad! including Jodan Cook, Mac Taylor and Matty Myhill.

Q / Exactly how rad is Radical!?

Well i’m not gonna lie to you.. It’s pretty Rad! and how hot is a hot dog?

Q / Can people mix and match the colors?

Yeeeah they can!! With the affordability of those bad boys you’re pretty much expected to get two pairs or swap a hand with a friend!

Q / Do they come in different sizes?

They come in a ‘one size fits most’ Large. The gloves will be available in different sizing when we have some other models.

Q / What makes the Radical! the glove of choice?

The price, the colours, the concept and the peer pressure.. All the cool kids are doing it!

Q / Radical! has that early 80’s skateboard feel to it, what motivated that?

The word ‘radical’ just screams 80’s to start with.. The entire concept of the company is really poking a bit of fun at the word. But like many things, the 80’s feel is coming back into snowboarding. It could fade back out or it could stay for a while. But everyone loves bright colours and retro styles right?

Q / How has the response been from the snowboarders so far?

In Falls Creek alone, the response has been amazing! A majority of the mountain staff purchased a pair or two for themselves just on the opening night. Since then, alot of the riders coming into falls have seen all the crew running them and have gone and bought a pair as well! Let’s hopem this trend continues on other mountains.

Q / Any wild parties, launches or events we should know about?

The Radical! Gloves Launch Party took place on Monday the 29th June at The Board Lounge, in Falls Creek. Unfortunately the party was restricted to half an hour. With live music from Ooz, several cases of beer and a few giveaways, the party stretched to an hour and in that time we sold over 80 pairs of Radical! Gloves.. Bingo!

Q / Where can people find out more about Radical! Gloves?

All you kids craving something fresh can check them out on out website WWW.RADICALGLOVES.COM
If you like what you see come join us on facebook and help us grow!

Q / Thanks Jez, and final words?

Yeah, thank you to everyone who has helped the Radical! ball get rolling and everyone who’s supporting us in 09′ STAY RAD KIDS!!