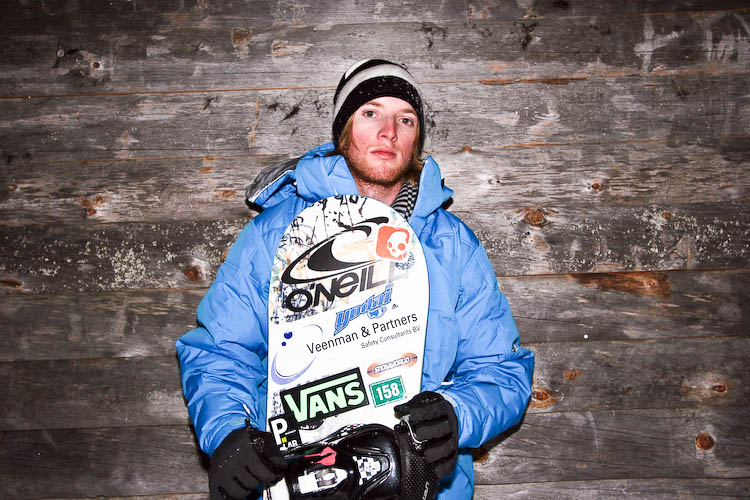 Pim Stigter, a 20 year old dutch snowboarder has had an unconventional rise to become a professional snowboarder. From his humble beginnings at his hometown resort of Snowworld Zoetermeer (An indoor resort), he now travels the world thanks to his sponsors O’Neill, VANS, Elan snowboards to name but a few.

Apart from a trip to the Austrian Alps at the age of four, Pim was relatively unaware of snowboarding with an unavailability of any major resorts in Holland. “After I saw a snowboard half pipe contest in Fieberbrünn , Austria .  I really wanted to try that, so I did. One year later there was a indoor slope ten minutes from my house. As a kid I began to spend most of my spare time there” Pim said.

Growing up without resorts did not dampen or stifle Stigter’s commitment to succeeding in the sport he loved, “(The community) is like one big family because everybody knows each other, not the mention we only have 5 indoor slopes, and with only 5 places to snowboard in Holland your sure to know most of the guys who matter”

Pim says, having indoor resorts actually helped his development in the sport “The indoor centers helped to develop my skills on rails and kickers because the slope is open 365 days a year during the day and evening. You can do so many runs as  it’s a short run, and a fast lift so you are up in like one minute and down again in fifteen or twenty seconds. We always have a lot of rails and a twelve meter kicker during summer time. Holland is known by good rail riders and that’s because little kids ride rails all day long from a super young age.”

Like most passionate snowboarders Pim neglected his schooling a little with all the training required of a professional snowboarder, “I never liked school, like the most snowboarders, I was always skateboarding or snowboarding instead and not even thinking about going to school. Recently I have been attending Johan Cruyff College which has given me the reason and enthusiasm to go back to school again. It is designed for professional athletes, with all the lessons related to the sports industry. All the teachers are former professional athletes, so they understand the passion we have for the sport. It enables me to  fit the program around my snowboarding commitments.”

On his future, Pim says “I’m studying sport marketing & communication. I would love to stay in the snowboard scene when I’m to old to rock & roll. I like create and organize contests or something similar.”

Pim Stigter has been lucky to travel all around the world with his snowboarding. Living the never ending winter for years on end has been a dream. “Last season I was at the World Cup Big Air in Moscow in Russia, that was a really cool experience and this year I’ve been to the World Cup in Stockholm, Sweden and that was a little bit special because the coach of team Holland comes from Stockholm so he took us to all the cool places in town.”

Currently riding in the FIS World cup series, Pim has been riding the ups and downs of the snowboarders life with great enthusiasm, “This year is my second year in the FIS World Cup series and also the national team. I had a bad start this season because I had a broken leg so it took a while till I was riding at my former level again but I got 12th place in Sofia, Bulgaria and 21st in Graz, Austria so I’m very happy to be back on my snowboard.”

Snowboarders are renowned for their love of all sports extreme. Pim has grown up delving in a variety of sports from his childhood, we may be talking to the next Shaun White “Skateboarding and surfing are just hobby’s from me and I’m thinking about doing any contests at the moment, apart from snowboarding”

The fun never ends for Pim, with an exhaustive season planned for 2009, we can certainly expect to see and hear a lot more from this rising star “I already had a super busy season, first I was to New Zealand than training for 5 weeks in Saas Fee, Switzerland and now I’m traveling for a and a half month through all of Europe.

After the Burton European Open and the Dutch Championships in Laax Switzerland, I’m in Italy for photo shoots. I also need to go to school for a few days,  than to Moscow in Russia for the World Cup, followed by some traveling and  filming for a Dutch snowboard movie.”

And the next few years for Pim? “No injuries, a lot of traveling, a lot of snowboarding and maybe even my school diploma.”

Whatever he does, his star is rising rapidly.