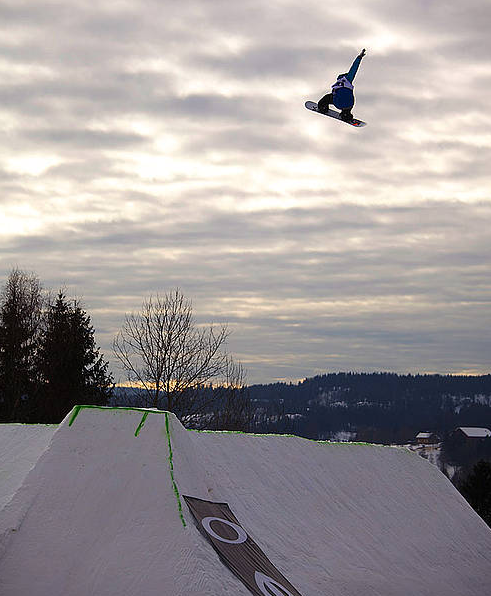 One of the most impressive snowboard athletes in the world today, Peetu Piiroinen (FIN), reconfirmed his reputation with a first place finish at the coveted 6Star Oakley Arctic Challenge. The thousands of fans at Tryvann Vinterpark in Oslo, Norway witnessed a piece of snowboarding history as 21-year old Peetu Piiroinen took first place in today’s slopestyle competition, and with an additional 1000 TTR ranking points on his account, he took an unassailable lead in the TTR World Rankings.

In two weeks time, he will be crowned Swatch TTR World Snowboard Champion at the final 6Star event of the Tour, the Burton US Open. The Arctic Challenge podium was rounded out by Norwegian favourites Torstein Horgmo in second place and Mikkel Bang in third.

Peetu Piiroinen Securing his Second TTR World Champion Title
The young Fin has earned himself $35 000 USD today with his Arctic Challenge win. This season, Piiroinen has shown his nerves of steel, consistent technique and a seemingly untiring ability to tackle the various formats on the Swatch TTR Tour by taking podium placements at every 6Star event on the Tour. He took 2nd place at the 6Star Billabong Air & Style in Innsbruck, Austria, 3rd places at both the slopestyle and halfpipe at the 6Star O’Neill Evolution in Davos and victories in both formats at the 6Star Burton European Open in Laax, Switzerland. The deserving Piiroinen has shown his exceptional talent and caught the eye of the fans and media worldwide by successfully balancing his commitment on the TTR Tour even while excelling at events outside the Tour. He comments on his season; “It has been the best season ever. Silver medal at the Olympics and now the TTR title. I have got so many podium places and I have had no injuries, it could not have been better.”

The exiting Arctic Challenge final saw Piiroinen stomp an incredibily clean last run that nudged Peetu into the top podium spot. His smooth run consisted of a switch cab 270 to fakie on the top rail, frontside 540 melon on the canon rail, backside 1080 late cork, backside rodeo 720 and a gigantic frontside crail on the hip. Piiroinen remains modest as always about his win, “I really didn’t expect to win here at the Arctic Challenge, but I knew that I had a good chance to take the title here. It feels so good to take both. And it is the second title in a row. Now I can take it easy and maybe drink a beer.”

The founder of the TTR tour and owner of the Oakley Arctic Challenge, Terje Haakonsen (NOR) praised Piiroinen’s ability to ride all formats on the TTR Tour, “That is why he is a good snowboarder. He is not specialized, but can ride all of them, also when it comes to quarterpipe he can ride really big. He had a lot of second and third places but he is always the guy that can win. He is just a really solid and inventive rider.”

Valuable TTR ranking points handed out at The Oakley Arctic Challenge
The race for the Top 5 spots in the Swatch TTR ranking is on fire with the final 6Star event, the Burton US Open, kicking off in just one week’s time. Eric Willett (USA) moved into the TTR World No.5 spot with a 9th place today and up and coming rookie Roope Tonteri (FIN) moved into TTR World No.7 with a 7th place. Seppe Smits (NED) made the move into the TTR World Top 10 a fourth place finish, today. With two more 6Star results on the menu at the Burton US Open the Top 5 is a desired place as all riders want a piece of the Swatch TTR end of season prize purse of $200,000 USD, as well as guaranteed invites to next season’s 6Star events.

Next Up on the Swatch TTR Tour
The Burton US Open is only one week away with action kicking off March  15th, 2010 in Stratton, Vermont. You can watch it live and follow as the news unfolds on www.ttrworldtour.com. Don’t miss the crowning of the 2009/2010 Swatch TTR World Snowboard Champion, Peetu Piiroinen, who will receive the TTR trophy and a check of $50 000 USD.