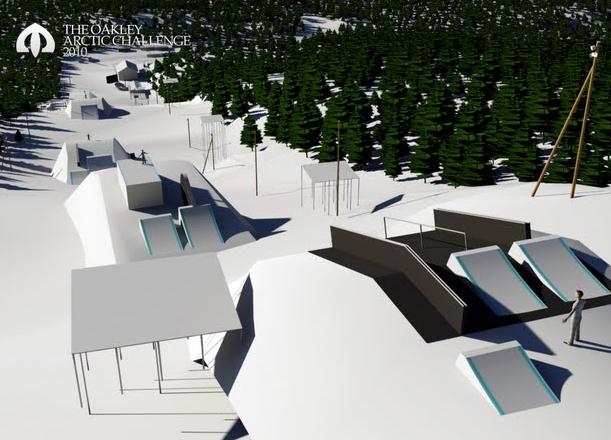 The Oakley Arctic Challenge is on in Oslo, Norway this weekend and if you have seen the competition before you’ll know it’s one not to miss. What’s more, Olympic silver medalist Peetu Piiroinen has a chance to secure the TTR title if he performs well.

The 6Star Oakley Arctic Challenge (TAC) is set to take place in Oslo, Norway March 5th-7th 2010 with an impressive rider list that will be sure to create some intense competition.  The legendary event has, throughout its existence, created stars and constantly pushed snowboarding to develop and shine in the media spotlight. This year, TAC is shaking things up by taking on a Slopestyle format and has attracted a stacked rider list after the close of the 2010 Olympic Winter Games.  Rescheduled from a date in December 2009, the event prepares to shake the TTR Rankings with the 2009/2010 season in its final stretch. It is a crucial event for top riders to collect a 6Star result in the last months on the Swatch TTR Tour, and offers the possibility for current Tour leader Peetu Piiroinen (FIN) to create an unassailable lead and secure a second TTR World Champion Title before the Burton US Open, the last 6Star event on the tour.

Swatch TTR World Champion Title on the Menu?
The Arctic Challenge is one of the premiere snowboard events in the world and is the signature event of TTR co-founder, Terje Haakonsen. It was historically the crowning event of the TTR World Champion until the 2005/2006 season. This year could be a repetition of the early TTR years, as one rider has taken a hefty lead and with a good result at TAC can secure the TTR World Champion title into his name. 2008/2009 TTR World Champion, Peetu Piiroinen, has had an amazing season and was able to take the tour lead in January with podium placements at both formats of the 6Star O’Neill Evolution and later on with wins in the halfpipe and slopestyle formats of the 6Star Burton European Open. Peetu has managed to balance his TTR commitments as well as shine at events outside the TTR tour winning an Olympic silver medal and last weekend taking the title at the Toyota Big Air in Japan. It is general knowledge that Piiroinen is a competition machine and all eyes are on Peetu to see how he will do at TAC and if he will be able to claim a second consecutive TTR World Champion Title.

The coveted TTR Top 5 getting crowded
Currently sitting in World No.3 on the TTR World Ranking list, the young Gjermund Braaten (NOR), will need to put on a solid performance at TAC to defend this spot, as there are many riders slated to be present who could challenge his position in the rankings. In fact, every rider present who is currently in the TTR Top10 stands the chance of moving into the World No. 3 spot: Marko Grilc (SLO), Antti Autti (FIN), Christian Haller (SUI), Stale Sandbech (NOR), Eric Willett (USA) and Janne Korpi (FIN). These riders are all looking to get a piece of the end of season Swatch TTR prize purse of $200,000 USD as well as the guaranteed invites to next season’s 6Star events.

Watch The Action Live
If you cannot make it to watch the action in Oslo from the 5th to the 7th of March 2010 join the live webcast on www.ttrworldtour.com.  Don’t forget that on the same weekend there will be 4Star action at the Nescafé Champs halfpipe event, in Leysin Swizerland. Check up on the TTR website for the latest updates, videos, photos and blogs.