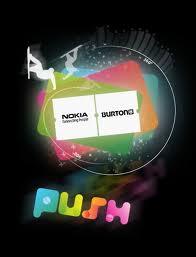 Nokia and Burton are working together to create a new way to visualize snowboarding. Called Nokia x Burton: Push Snowboarding, the goal of this partnership is to use the Nokia N8 phone to capture data from sensors on the rider and the snowboard to reach a new level of connectivity.

“As the name suggest, we’re basically taking what is essentially a mobile phone and pushing — sorry for the pun — but pushing the technology to the limits,” says Stuart Wells, a member of Nokia’s marketing team. Nokia is working with Hyper, a London communications agency, in the development process. Burton declined to comment on the Push project

According to Wells, Nokia approached Burton in early 2010 to propose the collaboration. “I saw what they have and who they are and how they approach life, and I thought, this could really work with them,” he said, pointing out that the companies share a “pioneer spirit” in their respective areas. He added that Burton’s expertise in snowboarding technology and their support in the community made them an attractive partner to Nokia.

“The project at the moment is at pilot stage,” Wells said. “We’ll take it to a point where I hope Burton, or Nokia, or another partner would think about producing the hardware into mass production.”