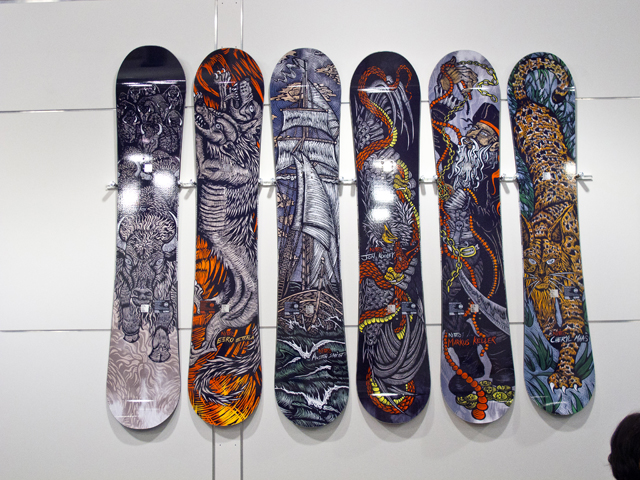 Nitro Snowboards are a top brand when it comes to hardwear and have a pretty spot on collection of outwear too. In this tasty little product preview one of the head guys from the company gives you a quick run through of what’s hot in the hardware department for the coming 2011/2012 season.

There is going to be a range of snowboards designed very closely with Nitro riders, such as Eero Ettala, Austin Smith, Bryan Fox, Jon Kooley, Anton Gurrarsson, Ben Bilocq and Marcus Keller. They will be have a board designed for their specific needs by a designer and then the riders will each design their own graphics. Another nice new board product is the Factory series with takes standard shapes and concepts like the T1, Team and the Rook and basically got them pumped on steroids. The end result is a line of high-end boards that are lightweight and super responsive. There are four different models of these new faster, stronger, better boards; one based on the T1, one on the Rook and two on the Team.

Also new is the Blacklight, which is one of Nitro’s top-end all-mountain boards that comes in camber and Gullwing. It is an all-mountain freestyle twin tip which comes in four different width sizes from normal to wide, with two stages in between which means you can get a super custom fit no matter what size your feet are. This range is gonna stoke a lot of people out.

In the binding department there is not so much revolution going on but rather evolution with loads of nice details being added to an already solid line of products. With the lightweight and ultra-responsive Machine binding, there is now air dampening in the form of airbags on the base and a reinforced strap with a stainless steel cable integrated into it, meaning it’s virtually unbreakable whilst remaining nice and flexible. The Phantom is Nitro’s super responsive highend freestyle binding which features a lightweight flat highback which is sick for tweaks and sideways movement. The Phantom also features the same in strap cable technology and looks like a key bit of kit for tearing up the park.

For boots the main bit of technology is the Reducer construction, which features in the Reducer and Select models. This involves 360° casting which means that instead of just the top of the foot being cast, as is the case which regular casting, the whole foot is cast which gives a awesome comfy fit. It is also more compact and more lightweight. A really important evolution for the 2011/2012 Nitro boot range.