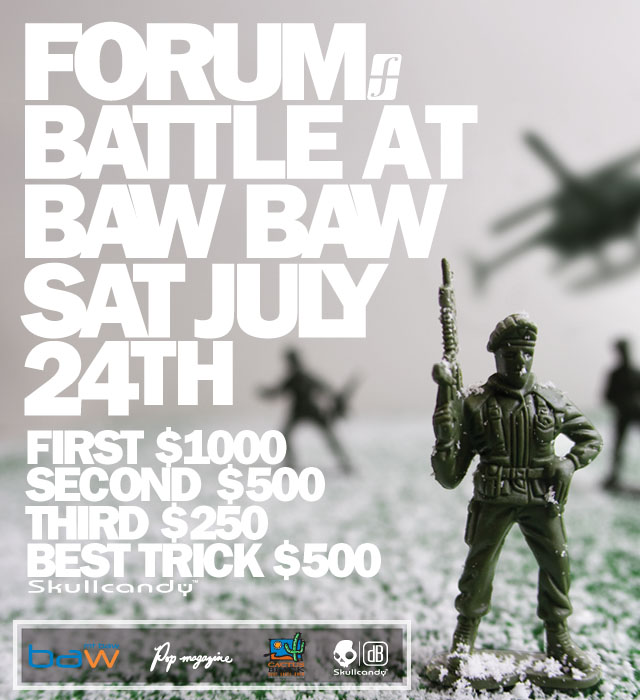 Heaps happening down at Baw Baw this weekend, most importantly of course is Forum’s Battle @ Baw Baw rail jam which has been getting bigger and better every year.

But that’s not all for the weekend, check out what Baw Baw have planned:

Snowboarding tricks, Christmas decorations, fireworks and even a chilli dog eating competition are all on the agenda for this weekend at Mt Baw Baw.

Forum’s Battle @ Baw Baw, sponsored by Forum Snowboards, has previously attracted snowboarders from around the globe, and has established itself as a premier Rail Jam event on the Australian snow calendar.

The ‘Battle’ will kick off at 1pm. Spectators will enjoy a buzzing competition atmosphere, chilli dog eating competition, and the ‘snag and a can’ is back again for only $4.

Meanwhile, kids and families will be able to enjoy Christmas in July, with Christmas decorations, Santa, loads of lollies and activities plus a special Christmas menu at Village Central for all to enjoy!

Resort CEO Leona Turra is all smiles as she walks around the resort helping with the weekend’s preparations. “there are Christmas decorations being put up, and the Terrain Park Crew has been working to make sure the feature for the competition is in place. I’m swore to secrecy about the surprise snowboard feature to be launched on Saturday – I can say it will be a welcome one for all the freestylers out there.”

A spectacular fireworks display is also planned for the Saturday night, which people from Pakenham through to Moe will be able to see if it’s a clear night.

The Saturday night will also bring tunes form the band “Crush” at the Alpine Hotel, plus the resort will give away a Forum Forever Manual 153 Snowboard. Those wanting the chance to win the snowboard should SMS their address to 0429 650 484 before 24th July.

2 Replies to “Big weekend for Baw Baw coming up!”