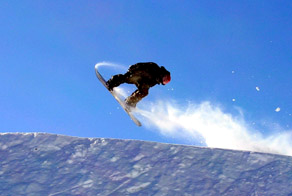 With record snowfalls and 55cm falling in the last 24 hours, hundreds of people flooded into the snowy mountains of Thredbo to witness the lights, action and live music that was MTV Snow Jam 2010.

Burton Snowboards once again partnered with MTV for this year’s Big Air snowboarding event. The one-off MTV Big Air acted as a spectacular backdrop to one of Thredbo’s biggest parties. 25 international and locally invited riders including Canadian Burton boarder, Mark Sollors and local favourites Jye Kearney and Ryan Tiene, battled it out on the 60 foot kicker, the largest Thredbo has seen, at the base in the village to win a share of the total $8,000 cash purse. Canadian Burton rider Mark Sollors, clinched the win with a flawless frontside nine. “I’m so stoked on the win, it’s my second time to Australia and although the conditions were tough, I felt really good about how I rode and had a lot of fun in the contest”. Second place was taken out by Jeremy Thompson and third, Jye Kearney with a double back flip.

Pop sensations Operator Please got the party started performing hits from their latest album, Gloves, including Logic, and Like Magic. Bliss N Eso took to the stage, rocking the throngs of fans on the mountain with their hit songs Eye Of The Storm, Down By The River and Addicted. Jonathan Notley aka MC Bliss described their performance as “Amazing. We’ve never done a show in the snow outdoors before, people were going crazy! We love Australia and are stoked to do our last show here before we head off for our US tour tomorrow.”

Off the back of the success of MTV Snow Jam in Australia, the hype is set to cross international waters as it heads to Japan next February, 2011. MTV Japan Jam is an extension of MTV Australia’s long time winter flagship event, Snow Jam. Creating the Snow Jam VIP experience into a travelling tour, MTV Japan Jam will deliver the entertainment and celebrity of Snow Jam, whilst capitalizing on the exciting and intriguing Japanese culture. Hosted by MTV VJ Erin McNaught, the MTV Australian crew are planning a mad ten day adventure that will see our 20+ VIP entourage experience the best of Japan from February 17 to 27, 2011.