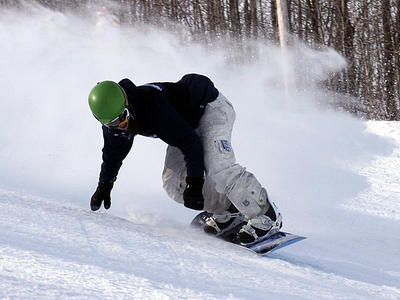 Lisgar Collegiate Institute senior Rachael Penman capped her high school snowboarding career in style last week by winning a gold medal at the 2011 OFSAA snowboard festival, at Camp Fortune in Chelsea, Que.
The Grade 12 student made her third OFSAA appearance in four years – Penman missed only her Grade 10 season with a dislocated shoulder, suffered after going off a jump – and was the fastest down the slalom run and second in the giant slalom to win the girls’ combined title.
Along with teammates Maggie McCann, Darcie Slater and Grace Quinn, the Lisgar girls also achieved their goal of a podium finish thanks to their third-place result in the team competition at the first OFSAA snowboard event to be hosted outside of southern Ontario.
“It was awesome. Home-hill advantage gave us a step up,” says Penman, who is also an instructor at Camp Fortune. “This is the hill we race on and the hill we train on, so it’s nice.”
Knowing the course would get chopped up after the first few racers made their way down the slope, the Lisgar team plotted out different lines they could take around the gates so that they wouldn’t be slowed as much by the ruts where most others turned.
The strategy paid off in a big way since Lisgar needed every last placement point to get their bronze medal since they wound up tied with another school at 144 points.