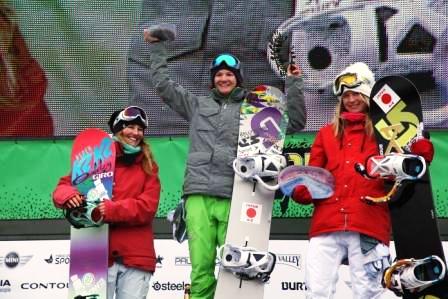 Stratton Mountain, VT – Thousands of people rolled in to Stratton, Vermont for the 29th annual Burton US Open Snowboarding Championships, presented by MINI. Three major titles were awarded today at the US Open, making it one of the biggest days in competitive snowboarding.

“It’s been an incredible season,” said Kelly Clark. “Not only am I happy with the level of my riding, I’ve also had more fun than ever, and my results speak for that. The Open is one of my favorite events, and I feel privileged to have the most halfpipe wins on record. It’s also huge for me to win the Burton Global Open Series title because it’s the one award that’s been elusive for me, so I’m super happy to walk away with it.”

The day kicked off with the women’s halfpipe finals where hometown hero Kelly Clark (USA) stole the show in one of the most exciting women’s finals of the season. All the girls came out swinging from their first run, but Kelly took a healthy lead from the beginning with a score of 91.05. Fellow Vermonter and Olympic gold medalist Hannah Teter tried to catch Kelly and went big and technical in her second run, starting out with a huge method followed by a frontside 900 stalefish, a backside 540 melon grab and a frontside 720 stalefish. But Kelly kept topping her own scores, earning the best result with her victory lap. Kelly’s highest scoring run started out with a huge 900 indy grab, a backside 540 mute grab and the only stomped 1080 in the women’s finals. Kelly has had one of the best seasons in the history of snowboarding, and her win today made this her eighth consecutive victory for the season.

In the men’s finals, the riders delivered what the crowd wanted to see – plenty of huge Cab double corks, a double crippler, a 1260 and large doses of style all around. Reigning US Open halfpipe champion Kazuhiro Kokubo held onto his title for the second year in a row with a run that started off with a super smooth frontside alley oop nosebone, frontside 900 melon grab, Michaelchuck nose grab, frontside double cork 1080 and a Cab 1080 melon grab. Iouri Podladtchikov (SUI) had a solid first run that earned him second place in today’s finals. And Kohei Kudo (JPN) joined fellow Japanese rider Kazuhiro Kokubo on the podium with a third place finish. Kazu’s third run turned into a victory lap, so he rode straight down the bottom of the pipe with a huge smile on his face and his arms held high. After the competition, Kazu said his victory lap was his prayer for Japan.

“I’m so stoked and so happy,” said Kazuhiro Kokubo “I want to say thanks to my sponsors, family and friends, and I hope my win brings a little joy and happiness to Japan.”

Right after the awards ceremony, a huge crowd gathered to see a free show by Swedish band, ‘The Sounds’.

Later this month, be sure to head to facebook.com/mini to vote for the MINI Creative Use of Space Award worth a total of $50,000 that will be shared by the best male and female rider who have shown creativity and progression throughout the BGOS series.

If you couldn’t make it to Stratton, check out replays of the event at burton.com or metacafe.com. The US Open, presented by MINI, will also air on ESPN2 on March 13 at 4:30 p.m. EST.

Footage of the 2011 Burton US Open will be available for download here:
www.4msports-server.com
Username: usopen2011_ftp
Password: strattonmountain2011

High-res photos from the 2011 US Open will be available at:
www.opensnowboarding.com in the Press section of the US Open website
Username: bgospress
Password: bgospress
Photo Credit: Shem Roose

About the Burton Global Open Series
The Burton Global Open Series events are the pinnacle snowboarding events of the season. Founded by Jake Burton, the Opens have grown from grassroots events to a global competition series, attracting tens of thousands of spectators and riders from around the world. Since the beginning, the Opens have been driven by riders, for riders evolving with snowboarding and riders’ needs over the years. With events held in New Zealand, Europe, Canada and the United States, the Opens set the standard for snowboarding events around the globe.

About MINI
The MINI brand is represented by 1,300 dealers in more than 80 countries. Since 2001, over 1.8 million MINI, MINI Convertible, MINI Clubman and MINI Countryman models have been sold. As the presenting sponsor of the Burton Global Open Series, MINI will be supporting the renowned snowboard manufacturer for the first time in 2011. As part of this partnership, MINI has launched a special rider award that draws on the MINI philosophy of using space intelligently. The Creative Use of Space Award will go to the most creative snowboarders who make their mark through inventiveness, riding fun and aesthetics – values that apply in equal measure to Burton and MINI.

About Metacafe
Metacafe Sports Live is your hookup for hot-ticket events in the action sports world: Snow, Skate, Surf, Bike. Featuring interactive live webcasts of key competitions around the world alongside exclusive interviews with top athletes, behind-the-scenes featurettes, and must-see moments caught on video, Metacafe Sports Live is the go-to source that keeps action sports enthusiasts plugged in. Metacafe is the first entertainment destination solely dedicated to showcasing the best videos from the world of Movies, Video Games, Sports, Music and TV. Attracting 40 million unique monthly viewers worldwide, 15 million in the U.S., Metacafe is the go-to source that keeps today’s Entertainment Drivers plugged in. Tune into www.metacafe.com for exhilarating coverage of the 2011Burton US Open. Get in on the action.

About TTR PRO SNOWBOARDING
Founded by Terje Haakonsen and industry innovators in 2002, TTR (Ticket To Ride) PRO SNOWBOARDING, is a non-profit, rider-driven organization. The TTR owns and operates the Swatch TTR World Snowboard Tour and the Swatch TTR World Ranking List and it strives to create the highest quality competitive snowboard environment in the world using authenticity, accessibility and innovation as guiding principles. TTR has developed the World Tour into the most exposed snowboard tour worldwide featuring a 10-month season calendar filled with hundreds of grass roots and major independent freestyle snowboarding events. Events are rated on a 1-through-6Star system, where all competing athletes earn TTR world ranking points based on the star level of each event; a 6Star event holds the highest allocation of ranking points. The top male and female riders are crowned TTR World Snowboard Tour Champion at the last 6Star event of the season – the Burton US Open. For more information, visit www.ttrworldtour.com. 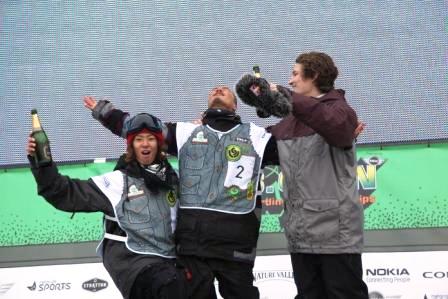