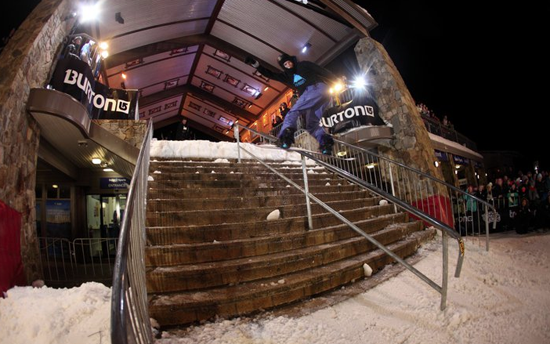 So if you were lucky enough to be up at Buller over this weekend you would have no doubt caught the Burton Cattlemans Rail Jam that was happening in the Village centre on Saturday night. I love this comp and hate that I missed it, but Jye Kearney killed it and nailed the win with apparently a million 270 combos.

Congrats to the Pie Man! And have a read below for a write up from Buller >>

Jye took out the title with a near flawless session that saw him stand out above the other 16 competitors on a level of his own. Jye, who’s been competing in the event since he was just 14, finally took the crown and became the first rider from NSW to win the infamous Mt Buller competition. Jye’s landed tricks included a number of backside 270’s on and off, a gap to cab 270, a frontside 270 and a 50-50 transfer from the top close-out rail to the stair rail on both sides of the stair set – something never done on both sides in the event before.

“I’m so stoked. What a night – four thousand big ones – I had so much fun,” Jye said after the big cheque was handed to him by MTV’s Erin McNaught.

The Best Trick of the night was awarded to Tim Laidlaw; the Mt Hotham rider dropped a technical trick on the infamously difficult outside double-kink rail.

Second place was Mt Buller favourite and veteran Cattleman’s Rail Jam competitor Mitch Williams who consistently pulled out technical, smooth and stylish tricks while third place was another cross-border infiltrator to Mt Buller, Pete Long, the Thredbo veteran, whose skateboard-influenced style and different approach made him a crowd favourite.

The field was dominated by young riders and fresh faces who spiced up the competition adding in many “never-been-done” tricks, including Greg Murray who all but stomped a 50-50 from the top close-out rail to gap down to front board on the stair rail.

“With the Cattleman’s rail opening up just once every year for this event, we decided to build an exact replica feature which was opened in Mt Buller Park on Friday. With a full day to experiment on the replica the riders really pushed the level of riding to new limits and put on a great show for the crowd”, said Paul Colby, Burton Brand Manager.

MTV ensured the fun didn’t end with the Cattleman’s Rail Jam, presenting the official after-party to wrap up MTV Snow Jam 2011. This year MTV Snow Jam took the form of a 3-day party tour, kicking off in Melbourne with a launch party featuring Lil Jon and culminating with a bang at Mt Buller’s Kooroora Hotel last night. Sydney DJ duo, Softwar warmed things up before Muscles took the stage to turn the heat up another notch for the crowd, ensuring this party remains one of the most talked about on the Australian snow calendar.