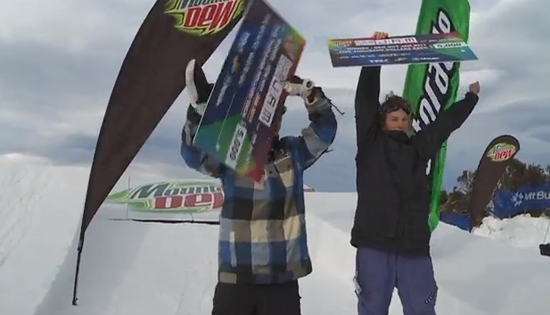 Jye must be having a ball this winter, he is on fire! Fresh off his win at Cattlemans he has kept the good times rolling with Chris De Campo as the pair took out the Dew Hut Jam at Mt Buller.

Apparently the weather was looking ominous so they called an early comp much to the surprise of folk on shredding the day away. Check out the highlights below and have a read what Buller had to say.

After competing together for the first time in last year’s event, the pair of 18 year olds walked away sharing a $10,000 cheque after narrowly beating out Team Billabong during the 90-minute jam session jumping and jibbing the Dew Hut, which was the focus of the slope-style event on Bourke Street yesterday.

Both winning riders were stoked to take home the big bucks. “I can’t believe it! I’ve never won so much money in my life, I’m so stoked,” says one half of the winning team, Jindabyne local Jye Kearney.

Kearney also romped in the Gatorade Rookie award, taking a solid total amount of $9000 to put straight back into his career. “It was a huge surprise to win the Rookie award, I wasn’t really thinking about it but I just landed all my tricks and runs and the judging took care of it. I’m putting all the money straight in the bank.”

In his second outing at the Dew Hut Jam, De Campo says consistency played a role in Burton’s result. “We landed nearly everything and also pulled out some pretty big tricks.”

The Dew Hut Jam course is known throughout the snowboarding industry as one of a kind for not only its unique course structure but also as an event that that encourages competition between Australian and New Zealand snowboarders.

“It’s so good to have an event that supports team camaraderie. I will definitely be back next year,” says De Campo.

Event curator Russell Holt says “the event is brilliant because of its unique format – there’s nothing else like it – snowboarders are in teams of two and they have to ride together landing consistent, technical and creative tricks. It really challenges the riders whom are usually competing by themselves in slope-style events.”

“We practiced it a few times and knew each other’s strengths from riding together overseas, so decided to go with that and end it with a bit of a bang,” comments Lloyd.

Dew Hat Jam is the richest free-style event held in Australia and is also a 3-Star TTR Snowboard World Tour event, from which competitors gain points for their overall TTR ranking.

Thanks go to the MBP crew for an incredible job building the Dew Hut course and ensuring a fantastic spectacle and a safe event.