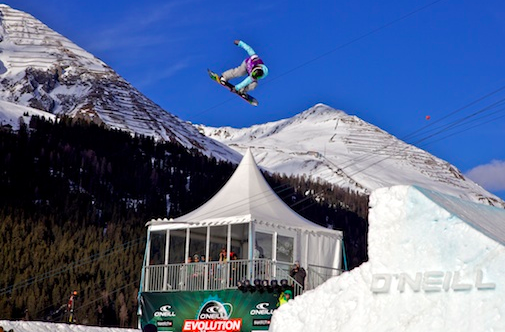 Big congratulations to Jamie Anderson, they’ve just worked out she can’t be caught in the points and will claim her second TTR title at the Burton US Open! Here is the press release from TTR:

American snowboarder, Jamie Anderson, made history today by clinching her second Swatch TTR World Tour Champion title at the 6Star Burton US Open. She is the first woman to ever win two TTR World Tour titles.

Jamie qualified first in today’s slopestyle semi-finals and will move on to the slopestyle finals as a favorite to win on Friday, March 11, 2011. Jamie was in contention for the TTR Tour title with fellow American, Kelly Clark, who has dominated every halfpipe competition she entered this season, but Kelly did not compete in slopestyle today and no longer has the opportunity to take the World No. 1 position from Jamie.

Jamie Anderson will be awarded the TTR World Tour Champion trophy and $50,000 USD at the close of the Burton US Open on Saturday, March 12, 2011 following halfpipe finals. Kelly Clark still has the opportunity to finish in the TTR Top 3 if she places well in Saturday’s halfpipe finals, in which case, she will be awarded with a sizable portion of the $200,000 USD TTR prize purse.

The 6Star Burton US Open is well under way and can be viewed live via webcast at metacafe.com. A more detailed look at Jamie’s amazing season will be released at the end of the US Open.