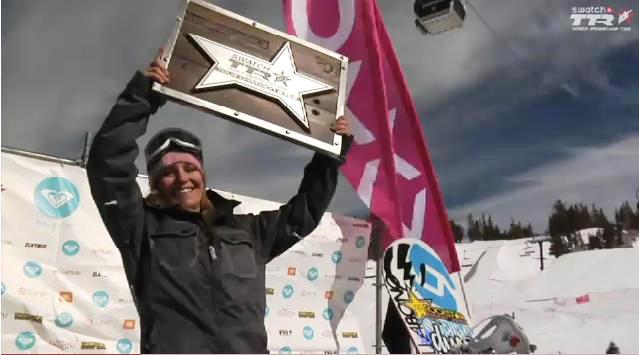 http://www.ttrworldtour.com – Since her appearance on the TTR World Tour in 2005, Jamie Anderson, from South Lake Tahoe, California, has been turning heads with her incredibly versatile riding skills. Jamie throws down complex rail combos with her signature style and goes big over the kicker line with effortless lofty airs, making it look all too easy. Jamie has made her mark in the freestyle snowboard world with her focused and constantly progressing creative riding style and a fun-loving down to earth attitude. She has some serious accomplishments under her belt including nailing the 2007/2008 Swatch TTR World Tour Champion title as the youngest rider to take the prestigious award and winning more than a dozen 5Star and 6Star events over the years.

Jamie dominated in the 2010/11 TTR tour season claiming victories on slopestyle courses all over the globe, starting off with the 5Star New Zealand Open and the 6Star O’Neill Evolution slopestyle competitions. With such a strong start to the season, she went on to win the 6Star Burton European Open and the Oakley Arctic Challenge slopestyle events, which set her high above the rest of her competitors. Her second TTR World Tour title was confirmed at the Burton US Open where she took second place in slopestyle, shaking off her last challenger Kelly Clark. When asked about her next year she says, “Next year, I think I will play it by ear, probably ride contests and film a little bit. I will see how the contest season looks like, I hope it will be less and bigger events. One day at a time! It will be fun!”