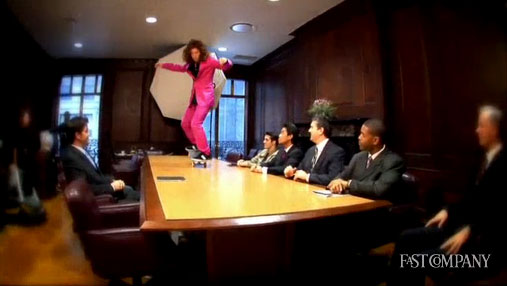 A tribe of mavericks descended on Washington this week. No, they weren’t Sarah Palin groupies, or Silicon Valley executives, or angry big-city mayors. They were the nation’s top halfpipe snowboarders, including Shaun White and Scotty Lago, who were among the Olympians greeted at the White House Wednesday by President Obama to celebrate America’s success at the 2010 Vancouver Olympics and Paralympics.

On Wednesday afternoon, Lago, a bronze medalist, posted a twitpic showing white sneaker soles peaking out from under a regal window drape. The caption reads: “I scared Obama, It was a very sneaky spot.” (See the 10 most memorable moments of the Winter Olympics.)

Snowboarders take seriously the art of not taking things too seriously. But after this season, the athletes face some serious questions about whether their sport is being transformed too quickly into a big risk, big money game.

Halfpipe snowboarders differ from most other athletes: they’re a proud comradeship of renegades, who scorn convention or anything that compromises their independent spirit. They also seek to advance the magic of the board, as a symbol of their limit-defying mentality. “All the athletes in snowboarding have this fire inside to just keep evolving and to keep pushing the sport,” says Hannah Teter, a silver and gold Olympic halfpipe medalist. (Watch TIME’s video “Hannah Teter Sells Underwear For Haiti.”)

But as Olympic snowboarders are soaring to new airborne feats, some in the sport are worried about the extreme risks and seemingly endless dollars being spent.

The pace of change quickened last year when leading halfpipe snowboarders, with the assistance of corporate sponsors, sought new equipment to break performance barriers and set a new bar in the sport. Snowboarders had already perfected the tricks developed by predecessors. To add new and ever more dangerous tricks to their runs, they sought equipment from other action sports like motocross, as high-end airbags (essentially large air cushions) and foam fits (picture a giant, foam-filled sandbox) were incorporated into 22-foot halfpipes. (See the best pictures from the Vancouver Winter Olympics.)

The safety equipment, ironically, enables more risk taking. During training, snowboarders position themselves to land in the airbag or foam pit instead of on the pipe. The softer surface largely eliminates the fear of falling, allowing snowboarders to focus on a trick’s air mechanics instead of the landing. Airbags and foam pits also increase the speed at which athletes master new maneuvers.

But such rigged training halfpipes are costly, and until recently the price tag put them out of reach. Then last season White and Kevin Pearce approached sponsors Red Bull and Nike, respectively, to invest in the halfpipes. Red Bull, a private company with estimated revenues of $4.43 billion, reportedly paid $500,000 for White’s private facility in Silverton, Colo., known as Project X. Pearce approached Nike about a similar though less costly facility, and got it.

“It changed our sport forever,” says veteran snowboarder Keir Dillon, who was invited to visit both private halfpipes.

White broke records, put a new spin on gravity-defying tricks and won his second Olympic gold in February. Though Pearce suffered a brain injury in December and could not compete, most felt that his skill matched White’s. Yet the leap forward in the risky nature of stunts has not been universally embraced in the snowboard community. (See how snowboarded Gretchen Bleiler trained for the Olympic games.)

The money has also been troubling for some. Sponsors have long been involved in athlete training. Organizations like the United States Ski and Snowboard Association use sponsor funding to develop training programs. And apparel and snowboard companies, like DC Shoes, develop training and equipment-testing facilities for sponsored athletes. (Snowboarders call this “giving back” to the sport.) Red Bull and Nike are mostly applauded for sponsoring private halfpipes. However, each of the companies’ sizable investment in just one athlete’s training was unprecedented and, for some, shockingly expensive for what was a rag-tag sport.

One Reply to “Time: Is Snowboarding Getting Spoiled by Big Money?”