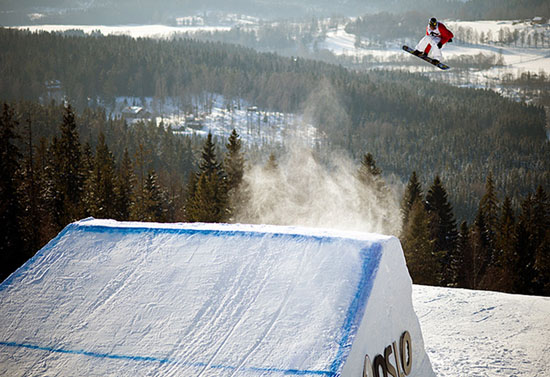 The clouds broke up in Oslo, Norway at Tryvann Vinterpark for the men’s and women’s slopetyle finals at the 6Star Oakley Arctic Challenge.

The women took to the course in the morning for a heated session, where Jamie Anderson (USA), once again, pulled ahead of the other competitors to take the win.

The men’s finals went down in the afternoon and Chas Guldemond (USA) was awarded with the win for his flawless run on the progressive slopestyle course.

Chas and Jamie were rewarded with the lion’s share of the $100,000 USD prize purse and 1000 Swatch TTR World Ranking points. With her win today, Jamie solidified her place in the World No. 1 position and is going to be tough to overtake in the women’s race for the TTR World Tour Champion Title. Chas moved up a couple of notches in the ranking into World No. 16, which set him up nicely for a run towards a piece of the $200,000 USD TTR end-of-seaon prize purse.

Americans Sweep the Podium in the Men’s Competition
The men’s final all came down to the last runs where riders were trying their best to get ahead of Chas Guldemond who stomped a nearly perfect first run on the long slopestyle course.

Chas put together a masterful run that consisted of a Cab 270 to frontside boardslide on the down rail, a switch 50-50 to method on the canon rail, Cab 1260 on the step-down jump, backside 1080 on the step-up jump, a 50-50 to backside 360 on the flat rail and finished with a crowd pleasing double backside rodeo on the last jump.

Chas was beyond excited with his win saying, “I’m really happy with the way I rode and to stay in first place through the last run really means a lot to me. I think it was my day today and it all came together perfect. What an amazing experience.”

Young American rider, Tyler Flanagan, pushed his skills to the max in his last run to take second place scoring just two points below Chas. And, young gun, Sage Kotsenburg, also threw down some impressive tricks to take the third spot on the all-American podium.

With their podium finishes, Chas now owns the World No. 16 spot and Sage is now sitting in World No. 29. Other notable ranking changes after The Oakley Arctic Challenge include Mark McMorris (CAN) moving into World No. 4, Benji Farrow (USA) took over World. No. 9 and Gjermund Braaten re-enters the TTR Top 10.

Jamie Anderson Untouchable Once Again
In the women’s competition, Jamie Anderson ruled the slopestyle course with her signature style and is now in an excellent position to take the 2010/11 Swatch TTR World Tour Champion title after her win in Oslo.

Jamie won the women’s competition with a run made up of a noseslide, 50-50 to backside 180, a huge switch backside 540, backside 360, tailslide to 270 out and ended her run with a stylish backside 540. Behind Jamie was Canadian, Spencer O’Brien, who put down a very smooth run.

And it was British rider, Jenny Jones, who honed her veteran skills on the slopestyle course to take third place. In the TTR World Tour Rankings Swiss rider, Sina Candrian, protected her World No. 3 spot, local rider, Kjersti Ostgaard-Buaas (NOR), improved to World No. 4 and Channelle Sladics (USA), remains in World No. 6. These ladies will have a tough time unseating Jamie Anderson out of the tour lead, but they will be giving their all at the 6Star Burton US Open for a TTR Top 3 finish.

Missed the action? You can watch is all on replay thanks to Freecaster.tv over on the TTR website.