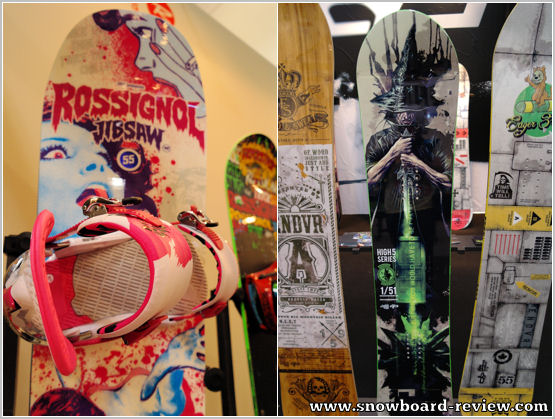 Here are some previews of snowboards next year. It’s too early but here are some ideas snowboard manufacturers are thinking right now. Take a look.

Academy – No huge changes at Academy. Academy’s biggest seller the Propaganda gets a new Rasta inspired “legalise” cannabis graphic which should enrage parent groups throughout the United States.

Amplid – Amplid’s park and jib offering caters for everyone. The Verdict has low camber for predictable pop and edge hold. The Aggronym retains its Flatliner profile for smooth on-rail action and the Dopamine combines a jib rocker profile with Amplid’s WDT core for lively pop but a damp charging feel, which means you won’t be confined to the park.

Apo – The biggest news at APO is that the MTD comes with two profile options. Standard Camber caters for the MTD’s loyal fan base and Double Rocker (rocker between the feet and camber at the tips) adds that powder and park versatility that a lot of snowboarders now demand.

Arbor – Arbor’s Parabolic Rocker and Grip Tech Edge “System” has propagated throughout their range. The Draft and Westmark remain Arbor’s park and jib big hitters, but now the mid-wide Blacklist joins them to cater for slightly larger footed riders.

Artec – The biggest change at Artec is the new vivid colour ways which will definitely split opinion. Mammoth local Gabe Taylor and Austrian Lisa Filzmoser get pro models. The Pop Rocker also returns to the line, we liked this board last year.

Atomic – Atomic has really got its board line’s aesthetics in order for the 2012 season. The Hatchet returns to its original rounded tips shape and gets a stunning multilayer animal claw graphic, it also upgrades to a 7000 impact base.

Bataleon – There are lots of new additions and changes at Bataleon for 2012. The all new Disaster and the Airobic pick up Bataleon’s latest innovation, Jib Triple Base Technology. Jib TBT has a wider flat section at the nose and tail for smoother butters and a more locked-on feel on rails and boxes. Joining the list of boards using Bataleon’s Freestyle Triple Base Technology is the Whatever which has a firmer flax than the Fun.Kink and a softer flex than the legendary Goliath. In the girls range the Feelbetter is the new addition, a soft and forgiving twin shaped snowboard with Freestyle TBT.

Burton – Every year we struggle to work out what the changes are at Burton. Without a catalogue it’s proven a little difficult, but here’s what we do know. Last year’s late release the Aftermath with traditional camber and the squeezebox core profile reappears in Burton’s 2012 offering. The Mr Nice Guy replaces the famous Love series. The Honcho is a new twin shaped medium spec cambered board with a directional flex. The late release Custom Restricted and Easy Living pick up the all new Camber Humps profile, from interviews we’ve read with Todd King from Burton on the Transworld Business website, Camber Humps sounds like traditional camber with early rise tips.

DC – DC continues to focus entirely on freestyle boards in 2010. Aaron Biittner and robo-boarder Torstein Horgmo join the ranks of pros at DC lining-up to ride the skateboard inspired PLY. The PLY incorporates two new technologies developed by DC to bring the feel of snowboarding even closer to that of skateboarding. Lock & Load camber features traditional camber which blends into flat sections 20cm before blending into the “Radius to Flat” kicks. DC claim Lock & Load camber improves pop, presses and boardslide stability. The PLY also features DC’s new Skate Twin shape which has a slightly longer and more streamlined nose kick for float in powder and smoother turn initiation and a stubbier more blunted tail for agile turns in powder and powerful ollie pop

Endeavor – For the last two seasons Endeavor has impressed us with their quality construction, no-nonsense technology and stunning graphics. This year the Endeavor line-up returns with a few significant changes. One little addition is rubber dampening strips in the sidewalls of the Boyfriend, Color and Hi5 series boards. Whereas the Boyfriend and Color Series use the rubber strips along the whole of the effective edge, the Hi5 has rubber strips limited to under the bindings. The Color Series is now available exclusively with reverse camber and the Live Series is available with camber or rocker. The biggest news at Endeavor for 2012 is the total redesign of the Board of Directors. To quote Endeavor’s owner Max Jenke “The Board of Directors was always meant to be the board that the team and particularly Scott and I were supposed to ride. We found we were never taking out the BOD and were opting for the softer more fun boards. So for 2012 we decided to completely redesign the BOD.” The new Board of Directors has a twin shape, zero camber profile and Endeavor’s new Wings technology that lifts the contact points at the start of the effective edge off the snow, it has a medium flex with carbon stringers and nice tight sidecut for a lively feel. All of Endeavor’s high end boards now use Basalt glass laminates.

Forum – At Forum the Honey Pot and Holy Moly are still using Combo Platter technology despite the mixed feedback, we’ll be sure to get back on one of these boards during the board test. After a little research I’ve discovered the new Bully isn’t new at all, however, the 2012 Sledge graphic is definitely going to bring some attention its way. Every year Forum gets a little more brazen with its topsheet designs, both the Contract Series with its hooker graphics and Destroyer with its Death Row (not the record label) graphics will have your grandmother falling of the back of her rocking chair.

K2 – There are two big pieces of news at K2. Fans of the Believer and Darkstar will be sad to hear that both boards got the chop. The good news is that the Believer gets an immediate replacement in the form of the Happy Hour. Designed with the help of the king of handplants and the world’s most avid fan of Black Metal, Danny Larsen, the Happy Hour is immediately recognisable by its ‘Stabby Twin” shape; soon to be universally banned from airbag sessions.

Never Summer – With the success of the Raptor and Heritage, Never Summer are adding to their Carbonium Series next season. The Proto CT aims to meet the demands of those riders that want the twin freestyle shape of the Evo and the powerful edge hold and pop of the all-mountain SL

Niche – We popped by the Niche stand to meet Dustin and Greg and find out about their green approach to building boards. Despite having a box of their freestyle boards stolen from the exhibition centre the night before the show, the guys were remarkably upbeat. Next year Niche will be releasing five boards onto the market, the Aether is Niche’s stiffer reverse camber all mountain slayer; the Theme is a true twin with a camber profile; the Knew is a soft, zero camber jibbing machine and the Minx is Niche’s zero cambered jib board for the ladies.

Dustin and Greg have put a lot of time and money into developing less hazardous and polluting materials to build snowboards out of. Snappy Sap is a resin they’ve developed from bio-renewable materials from industrial waste streams of the paper pulp and bio fuels industry. Instead of Fibreglass Niche boards use Basalt laminates; the fibres have 20% more tensile strength than glass fibres. Hemp stringers add liveliness to the boards and replace traditional materials such as Kevlar and Carbon Fibre which require vast amounts of energy to produce. The ABS sidewalls, base material and steel edges are created from recycled materials.

Nidecker – We all know it’s on the inside that counts, it’s just a bonus that Nidecker has sorted out their boards aesthetics for next season, we really liked the look of the Blade, Advanced and Dita Von Teese… for obvious reasons. Nidecker has also introduced “Ultimate Traction” to its boards, a 7 bump wavy edge (if you include the contact point and the start and end of the effective edge). From the catalogue description its sounds almost identical to Mervin’s Magne Traction, but there is no mention of a licence… might we be seeing the next big patent infringement unfolding under our very eyes?

Rome – For those Rome fans that have been waiting for the Mod to get rockered, it’s happened. The Mode Rocker introduces Free Pop Rocker (Flat profile from 5cm before the first insert to 5cm behind the last insert with rockered tips) to the traditional Mod construction, think high grade sintered base, Hot Rods carbon rode reinforcement and biax glass. The tasty graffiti style graphics come courtesy of Brick Lane local DFace.

Rossignol – There’s only one new addition to the freestyle fold at Rossignol, the Jibsaw. The Jibsaw uses the Freestyle Amptek profile which is essentially early rise tips; to that it adds a 7500 grade sintered base, a tight radius Magne Traction sidecut and Rossignol’s ridiculously poppy Carbon and Kevlar reinforced C/K wood core. We really like the artwork by London duo 2SickBastards, and the board goes very nicely with the revised Cuda bindings. We have a feeling the Angus may have to play second fiddle to the Jibsaw next season.

Salomon – Apart from the new Man’s Board, Salomon’s most significant 2012 release is the Powder Snake. The shape is much like the Sick Stick’s tapered twin and the spec is definitely geared towards powder with a powder camber shape and medium firm flex; but with K2’s Happy Hour about to make Stabby Twin shapes uber popular we don’t think it will be long before we find The Powder Snake slithering into terrain parks. The Grip and Drift return for another year, this year’s Drift pairs really nicely with the Arcade Melon colour way binding and the Grip has its own Chief binding colour way too.

Smokin – Smokin Jay continues to tread his own, very unique path, producing hand built boards in his Tahoe factory. One board we liked last year but couldn’t really stomach the graphics was the MIP; the good news is that the 2012 MIP graphics are a lot more palatable. And for those of you that like the whole blunted nose and tail shape, this year’s MIP takes it to a whole new level.

Stepchild – There hasn’t been a huge amount of change at Stephild, the biggest surprise being that JP Walker is into his second season of riding a pro model with a Rasta themed graphic… the man must love his red, green and gold. For all of those wondering where the Headless Horseman has disappeared too, don’t despair; the Headless Horseman is now the FTW.

Weekend – Weekend are the little guys producing small quantities of cambered boards in Austria for snowboarders who like a mid-flexing no nonsense twin shaped snowboard for riding everything. This year team riders Heikki Sorsa and Eddie Wall get pro models.
YES – I bet when Romain, DCP and JP thought of the name Yes they didn’t consider that they’d be the last brand on every list, so last but by no means least is YES snowboards. There are two new additions to the YES board range next year the Big City a directional twin with traditional camber and a slightly wider waist than Tadashi Fuse’s pro model and The Jackpot which features all of Nidecker’s flagship technologies from Camrock to Ultimate Traction edges. The extremely popular Great Dudes of History is now the Great Women and the likes of Bridget Bardot, Audrey Hepburn and Sophie Loren embellish the topsheet. For us the biggest development at YES is the inclusion of some wide models for larger footed riders.