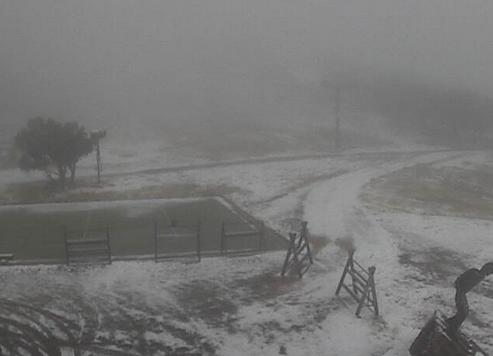 Mt Buller has had its first significant snowfalls for the winter season overnight as a cold front hit the High Country bringing around 2-3cm of snow. The Resort received a dusting on 11 April, however these new falls have blanketed the Village in a beautiful white cover.

The official opening of the ski season is still more than five weeks away, however the cold weather and early falls have been greeted with much excitement around the mountain with locals getting out and celebrating this morning.

Buller Ski Lifts’ General Manager, Laurie Blampied said: “It’s not unusual to have snowfalls in May but it is always exciting when the first real signs of winter arrive. It is terrific to have this early snow to start building a good base for the heavier falls to come and for when we start snowmaking in the coming weeks.”

The good news for skiers is that there seems to be plenty more snow on the way. “Long-range weather forecasters are talking about an above average snowfall year with significant falls later in May, as well as July and September. It’s also been a wet start to the year and with water in Lake Eyre the signs are looking positive” explains Laurie Blampied.

Mr Blampied explained it has been a busy summer at Mt Buller with over $1 million invested in expanded snowmaking operations on Wombat and Howqua, plus ongoing revitalisation of the lifting network with Koflers T-bar converting from diesel to cleaner, greener electricity.

Another significant project underway before the opening of the ski season is the installation of two carpet lifts at the popular Burnt Hut beginner ski area at Mt Buller. The 30 year old Burnt Hut triple chairlift lived up to its name in February when it was hit by lightning and extensively damaged from the resulting fire. The temporary carpet lifts will ensure this ideal ski area is kept open this season and a bigger and better replacement lift is planned for 2011.

Chief Executive Officer of the Mt Buller and Mt Stirling Alpine Resort Management Board, John Huber, said the combination of early snow and positive long-range weather predictions should provide sensational conditions for the coming snow season. “We are gearing up for what we expect will be a fantastic season here at Mt Buller, with everyone working hard to ensure our visitors have the best possible snow experience.

“Our reservations team has been busy taking bookings and it is hoped that the Winter Olympics motivates people to try something new or visit Mt Buller for the first time. With a huge range of activities both on and off the snow, Mt Buller has something for all ages and interests.”

The 2010 ski season opens with celebrations across the Queen’s Birthday long weekend from June 12. For information, tickets and accommodation go to mtbuller.com.au