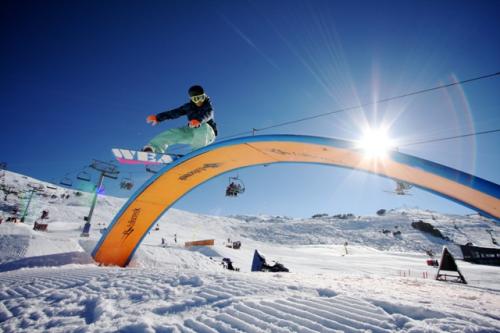 Freeriders are venturing over to the popular Castle Terrain Park to check-out the features created by Rueben Cameron, ‘Matto’ and the other members of the enthusiastic park crew.

Major freestyle events such as the annual Stylewars invite-only competition come to Falls Creek purely because the resorts terrain park is seen as world-class.

An appreciative bunch of adventurous boarders and skiers accept the challenge and ride the various rails, boxes, jumps and whatever urban-style feature the park crew come up with.

Currently there’s a Rainbow Flat Box, A-frame Up and Down Box, six meter Down Rail, five meter Donkey Rail several jumps and as we get more snow, more elements will appear.