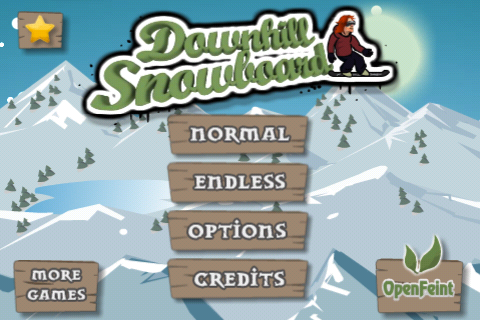 
If Angry Birds is your cup of tea, then DownHill Snowboard will definitely sit comfortably in your iphone app library. Brimming with quirky pop cartoon graphics and absurd “rag doll” game play you could be forgiven if you thought this little package was taking the piss out of our beloved snowboarding legacy. Fortunately though the creators, Coolabs, took this alternative direction, steering well away from the complications of the third dimension, and successfully concocted old school Super Mario with a dash of physics exam into a crazy snowboarding bonanza.

Choose your slope, your ride and before you know it you are being thrown into the trippy world of DownHill Snowboarding. It takes just a handful of restarts before you emerge subconsciously as one very focused individual trying to conquer what should be, from first impressions, a simple side scrolling game. Don’t be fooled though, once you master the controls and vast selection of tricks, flips, jumps and slumps the next hurdle is quickly upon you.

As you navigate through the seemingly endless unlock-able stages there are new and innovative challenges at each stage that require cunning calculation and concentration. Whether it be boulders and logs in the path in front of you or being chased by an avalanche, the beauty of this game is in its distracting simplicity. You can pick it up and play with incredible ease, but the deeper you go and more ambitious you get the game rolls out its mathematical side. It becomes all about the balance and landing. The ‘rag doll’ figure that you control flops around like a spineless drunk sliding, grinding and launching down the slope collecting generous points along the way until he lands awkwardly and crack!!! His neck snaps and you endure watching a few seconds of blood spurting from his body in the same vein as Kill Bill. Don’t be turned off by that reference however, because its all part of playful integrity of the developers style. 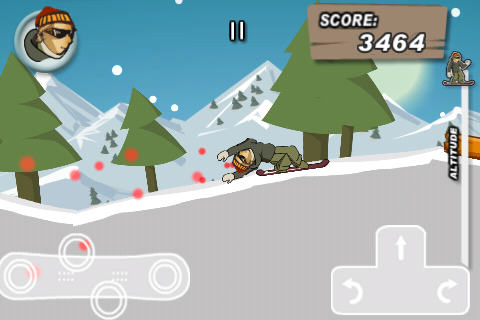 Coolabs have fused in the very basics of Open Feint social stat gaming networking, but fallen short of adding any dual player ability, which doesn’t effect the playability of the game, however it could be advantageous for the games growth. Maybe an interesting addition in future releases. 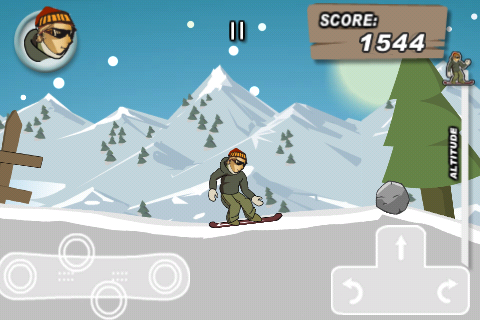 Summary:
The spineless drunk’s neck breaking antics and the two arcade style backing tracks are the two unique features of DownHill Snowboarding which basically sold me the game. Its a clever and refreshing contribution to the snowboarding range available on the app store.
The game delivers great graphics, intuitive controls and hours of entertainment at any time or mood. And at only $1.19 its well worth an addition to your app library.