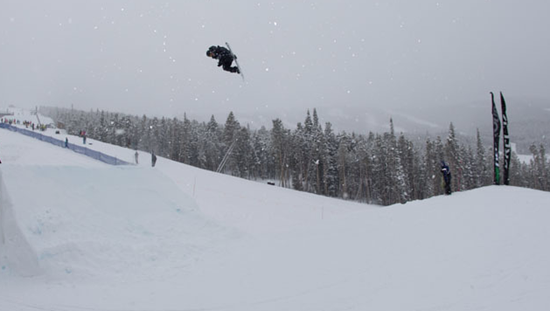 The final day of Winter Dew Tour happened overnight over in Breck, CO. Robbie Walker was riding in the finals after sending it all competition. It was not to be though, word is Robbie fell on both runs but we are yet to confirm that – he finished in 12th. Stoked on Robbie’s performance nonetheless, well done son!! It was a super competitive field and ultimately Torstein Horgmo took the win. The womens was just as fierce with Jamie Anderson, reigning Dew Cup champ taking the win! Check out the words below from the Dew Tour on all the action:

Mother nature once again dusted the slopestyle course with a layer of powder, but the top riders knew how to overcome the conditions and throw bangers during the Nike 6.0 Open snowboard slopestyle finals.

Torstein Horgmo established his dominance after posting a 96.50 on his first run, and the score held on until the end.

He was smooth and solid the entire run and finished with a backside 270 on the box and a backside 7 on the second-to-last jump. After a frontside double cork 10 on the last jump, he was the man to beat.

For a moment, it seemed like Breckenridge local Eric Willet would take the event title after throwing the run of his life with back-to-back double corks and a backside rodeo 5. But the magic fell apart when he attempted a switch back 10 double cork on the last hit and slid out the landing.

“That’s the run I’ve been wanting to do this entire time,” he said. But without the clean landing, it put him in seventh place.

A new face on the scene emerged when 17-year-old Canadian rider Mark McMorris threw down a cab 270 in on the down flat down rail, then switch lipslide 270, then cab 900 double cork, double wildcat, frontside 7, then back 10 double cork to finish in second.

“I’m just so happy to make a name for myself on the Dew Tour and just in the States in general,” McMorris said. He’s coming off a summer of riding in New Zealand and it seems to be working.

For a lot of riders, the key to tricking the conditions came by way of board waxes, and Chas Guldemond credits a wax he got last night as the key to his third-place finish. It also marked a first in his snowboarding career, since he’s never podiumed at the start of the season. He certainly had enough speed to mix a cab double cork 12 and a switch backside 9 into a backside double cork 10 into his run.

On the women’s side, reigning Dew Cup Champ Jamie Anderson was literally heads above the rest and even switched up her practice run at the last second.

“I know, unexpected,” she said. But the backside 180 to switch backside 180, a backside 360 and a frontside 360 she threw instead was clean and powerful and scored her in the 90s.

“I think from when I started riding with the Sierra Tahoe team we learned everything from just riding the mountain to riding park, pipe, slalom, GS and everything,” Anderson said. “And I definitely do think it plays a huge part in me just being able to ride and know how to get speed and push myself.”

“Most of the season I’m in Breckenridge so I’m used to riding jumps sometimes without speed and with snowy conditions,” van Gils said. “Because of the conditions it was just day by day and see how far you can get. Do the best you can.”

Cheryl Maas was super stoked to finish third after a few boardslides on the rails, and some backside 3’s and a backside 7 indy.

“The jumps were nice and big and the rails were really smooth,” Maas said. “I just was making my way through the course and I was just happy I was still standing.”

Also check out the vid courtest of Transworld Snowboarding. Torstein and Nicole.. classic: