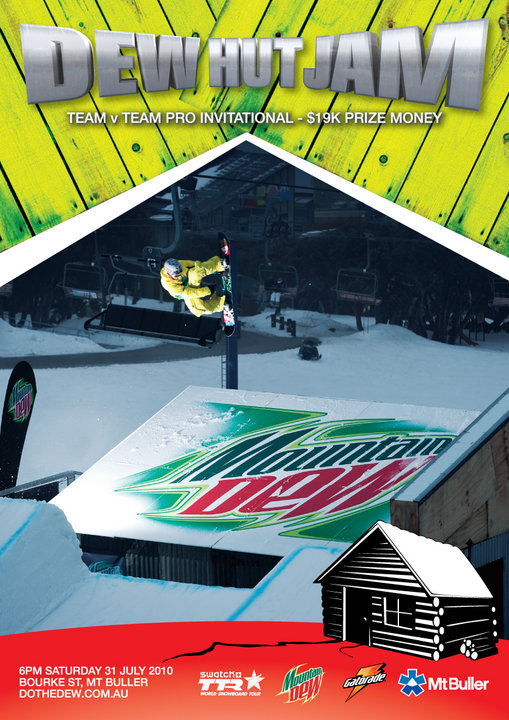 Fifteen teams of Australia’s best freestyle snowboarders will compete for a share of $19,000 in the second annual Mountain Dew Hut Jam on Mt Buller’s Bourke Street on Saturday 31 July 2010.

The country’s richest local freestyle snowboard contest features a massive 2.5 metre high house proportioned Mountain Dew hut as its centrepiece and established itself in 2009 as a totally unique event, not only due to the hut but as a team event, with each team selecting its best two jibbers to ride together. 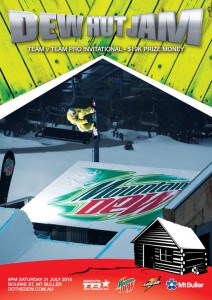 “In 2009, the comp broke new ground with its innovative course featuring a world first rideable house. The riders embraced the challenge and this year again we’ll no doubt see snowboarding pushed to new heights with new course developments, ” he says.

Specially constructed for Battle for Supremacy snow competition, the imposing Dew Hut feature soars out of the Bourke Street snowline and gives the riders a breathtaking feature from which to launch their biggest and boldest moves.

The winning duo from 2009, Team Quiksilver’s Nathan Perry and Tim Laidlaw, took out the battle in style, landing big tricks including a 540 over the hut. It was 15 year old Laidlaw’s win that inspired the creation of the new 2010 Gatorade Rookie award.

One Reply to “Dew Hut Jam Returns to Buller”