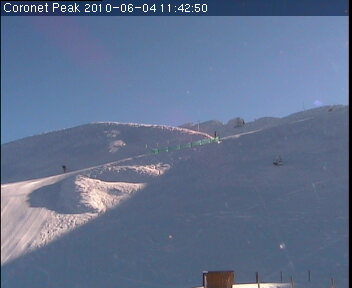 Queenstown’s Coronet Peak opens this Saturday (5th June) as planned for the 2010 season. Natural snowfall and snowmaking at Coronet Peak has produced enough snow to allow the ski area to open but Ski Area Manager Hamish McCrostie says skiing and riding will be limited on the lower slopes of the mountain.

“We will open with the Coronet Express Quad and the brand new Meadows Express Quad providing access to the M1, Million Dollar, Wall Street, Shirtfront and Big Easy. trails The Magic Carpet and beginners’ area will also be operating. But people do need to know that snow cover on the lower mountain is thin and skiing and riding will be limited on lower trails.” Mr McCrostie says the upper mountain will offer some good skiing and riding on trails with some off piste access as well. “We’re looking forward to getting the season underway, getting people used to the new mypass and NZSki RF technology, opening the new Meadows Express chair and welcoming people back to Coronet for the winter season.  Opening day is always a great catch up and reunion for locals and those who return each winter.”

One Reply to “Coronet Peak Opens This Saturday”