A short time ago Snowlife had the pleasure of catching up with Aussie super talent and Forum boarder Charlie Steinbacher. We found out how he’s been going after his recent stint in rehab following a blown ACL, whats involved in the day to day pressure’s of riding with a commercial brand and the tunes that get him fired up whilst shredding the slopes.

Q/ What was it that lured you the sport of Snowboarding? Were you a regular snow goer as a kid?

I grew up in Jindy, and both my parents are skiers, so they had me on skis when I was little but changed to snowboarding when I was about 13.

Q/ You’re now riding with the best of the best, was there a defining moment when you decided I’m going to do this as a career?

I think the first time I thought about snowboarding, as a career was when Forum first sponsored me when I was about 14.

Q/ You are part of a group called Comrades which is a group of young snowboarders who love to ride and live the dream. Its an incredibly appealing concept for the rest of us, can you explain the idea behind the Comrades and how you see it evolving?

Well me and the boys spend a fair bit of time together, we ride together everyday and live together when we travel. So comrades is just a way for us to be recognized as a group. 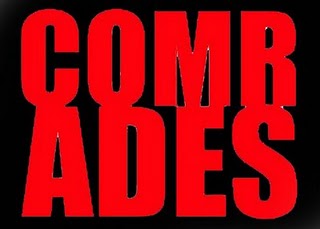 Q/ Its been said, yourself and fellow boarder Nate Johnstone decided one afternoon that would both shave your heads, can you tell us the story behind that and why you do such a thing considering you spend so much time in a freezing climate?

It was pretty random, Nate was the mastermind behind the whole thing. He wanted to shave his head and asked if I would do it with him. So we headed down to good old Wall-Mart and picked up some clippers for like 10 bucks. Then when we got to work. to top it all off we thought it would be a good idea for me to get a mullet, but that only lasted a week or so.

Q/ Is the 2014 Sochi Winter Olympics on your agenda at all?

Hopefully, I have been training with the NSWIS (New South Wales Institute of Sport) team for a few years now and will be working super hard over the next few years to make it to the 2014 games.

Q/ Blown ACL’s are so common these days in snowboarders, and unfortunately you are a recent victim. Do you think ACL’s blowouts are just a part of the sport or is it a direct consequence of the increased demand on riders nowadays?

Injuries are all part of it. Even the smallest of crashes can cause injuries.

Q/ Whats been your preferred method for passing the time recovering from the ACL? A bit of Shaun White Xbox style? 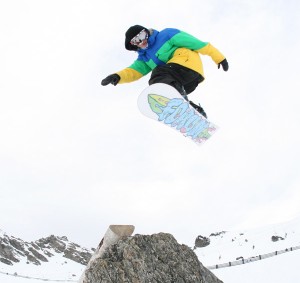 Q/ Snowboarding is a sport of style, technique, balance and most of all courage, were you born with that raw natural courage or did it come with time and hard work?

A bit of both I guess, i was always known for breaking a lot of bones from jumping off shit when I was little.

Q/ The Aussie winter is fast approaching will we see you around the slopes? Stylewars on the agenda?

Im keener than ever to get back on snow after my injury so ill be up there for sure. As for stylewars i would love to head down to Falls again and hangout with everyone and compete. Its one of the funnest events I’ve competed in so if I get the chance I will try get to stylewars again for sure.

Q/ You ride as part of the Forum team as well as Comrades, can you elaborate on whats involved with boarding for a commercial team?

Its all about getting shots and results,  so there is a lot of traveling around between resorts and countries to do as many contests as you can. And you have to juggle all that with photo shoots. Getting shots is the best way to please your sponsors and get yourself out there.

Q/ Many boarders and even product designers have adopted the ipod craze, do you put the plugs in when on the slopes? Is there a particular track that really gets the adrenalin going?

I love riding with tunes. it always gets you pumped and you can really focus on riding when you are listening to music. The Queens of the Stone Age are always good to ride to they have some crazy songs that get you pumped.

Q/ Thanks for taking the time to chat to Snowlife, on a final note with a name like Steinbacher you would get some interesting nick names, would you care to share them?

I never really had any nicknames, my older brother got called steiny back in the day though.

****
UPDATE
Since catching up with Charlie, he unfortunately took a nasty tumble in a pipe in NZ and dislocated his shoulder. So we won’t be seeing him on the slopes for the time being while he gets his shoulder back in order. 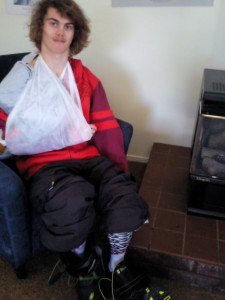