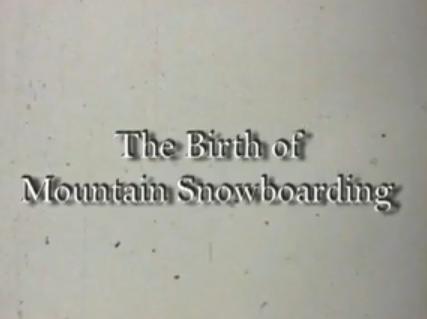 Everything has a story on how it all began and one thing that caught my attention was this quick flashback in time when Jake Burton started this mega business which was of course named after him.

At 57 years old, the widely successful snowboard tycoon is rarely seen without his signature ski uniform, a skull cap, boots and his board that all bear his last name. Burton has created an entire lifestyle, an Olympic sport and a multi-billion-dollar industry almost entirely by himself.

It all started with a $10 toy his parents bought him when he was a kid. It was called a Snurfer, a wood plank with a rope attached to one end that riders could use to surf downhill on land.

Jake was inspired. “From the minute I got on it I was into it,” he said. “I always thought that there was a sport there. It was made by a bowling company, Brunswick, and it was not marketed as a sport. It was sort of like the hula hoop.”

The Snurfer was a passing fad in the 1960s to nearly everyone except Burton, and his hobby soon grew into an obsession.

“So I graduate from college in ’77, and I had a pretty good job in New York City,”
he said. “I guess you could call it investment banking. It was a little different back then, but I wasn’t very happy. And that idea was still that there was a sport there.”

That year, Burton dropped everything, moved to Londonderry, Vt., and blew his $100,000 inheritance to create his first crude snowboard and found his own company. Just one problem. He had no idea what he was doing.

“I can remember sort of developing a board and trying to figure out how to make them,” Burton said. “I had this little woodworking shop, and I had developed this really small router to make boards. Twice the router shot boards out, and they went into a wall. I was sort of like a fish out of water.”

His goal was to sell 50 snowboards a day in that first year, but at the end of it, he had sold only 300. But the following year, sales doubled and a craze was born. Three decades later, Burton now helms a snowboarding mega-brand.

In 1981, a wooden Burton Back Hill board sold for around $115. Today, Burton snowboards still have a hardwood core but are coated in layers of fiberglass and finished off with steel edges and acrylic graphics. Boards come with such names as Bullet, Joystick and Meateaters Road Soda, and retail from around $300 to $1,500, for custom boards.

His name is now synonymous with some of the most popular events at the Winter Olympics and X-Games. His gear has been worn and designed by celebrity athletes such as Olympic snowboarding champion Shaun White.

While his company is private and does not release financial or sales figures, Burton Snowboards grosses around $700 million a year, by some market estimates.

It’s serious revenue for a not-so-typical company. At Burton headquarters in Burlington, Vt. and if there’s fresh powder on the nearest mountain, no one’s expected at work in the morning.