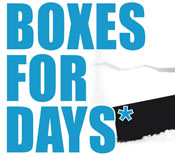 After a super well received tour of ‘Boxes for Days’ in both the US and Japan, the ‘super box’ contest is coming down under this winter touring through NZ and Aus. Those unfamiliar with the concept, it’s simple. Line up a bunch of boxes and see who can slide the longest.

The tour will run through Snowplanet in NZ, Selwyn Snowfields in NSW and Baw Baw in Vic. Best of all, anyone can enter. Check out the full media release below for details. 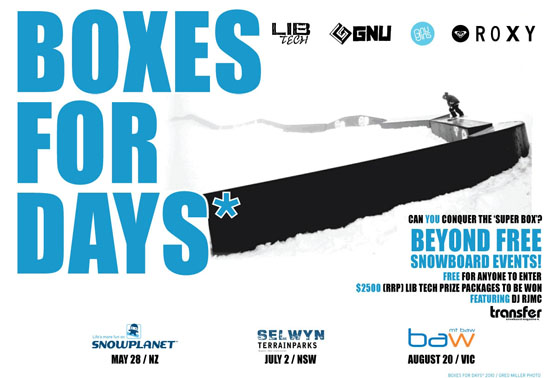 Lib Tech & GNU tour ‘Boxes for Days’ Down Under

Consisting of lining up terrain park boxes to create one uber-long ‘super-box,’ Boxes For Days is a fun new concept devised by the forward thinking brains of Mervin Manufacturing and its coming Down Under this winter.

Free for anyone from seasoned Pro’s to weekend hackers to enter, the events are happening at Auckland’s Snowplanet in NZ on May 28, Selwyn Snowfields (NSW) on July 2, and at Mt Baw Baw (VIC) on August 20.

The objective is simply to get to the end of the thing and Lib Tech Rep Marcus Stocker says the heat is on for the Down Under tour to better the action of the US and Japan events earlier this year where hundreds of eager shredders turned out to conquer the ‘super-box.’

“Its super entertaining, and all about bringing the fun back into snowboarding competitions – we’ll be working with park curators and the Mervin guys in the US on course construction to ensure we outdo what’s been done before.

“Plus the winners take home epic prize packs each including a newer than new snowboard from Lib Tech’s W11/12 range that’s not even launched in the Northern Hemisphere yet, along with bindings and outerwear, valued at $2,500 RRP,” he says.

A world class MC/DJ will be pumping up the masses and giving away free Lib Tech, GNU and Roxy product.

Come one, come all, see you there! The first 10 entries at the Selwyn Snowfields and Mt Baw Baw events will receive an annual subscription to Transfer Snowboard Magazine. Competitors must have valid lift passes.