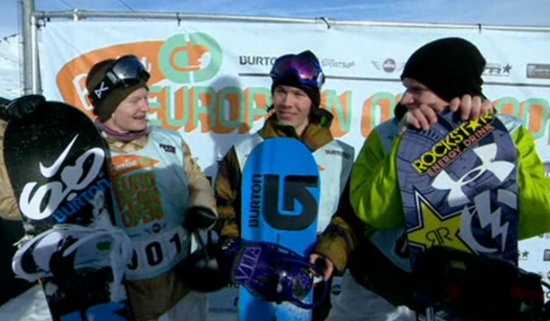 The Burton European Open slopestyle finals have just finished up in Laax, Switzerland and it’s a young Finnish rider Roope Tonteri who took out first in the 3rd last run of the day! Chas Guldemond fell and held 3rd leaving it to Peetu Piironen, last rider to drop but also falling leaving him in second place. Roope was guaranteed at least 3rd place but wasnt satisfied throwing down an epic run capped off with a 1440 to seal 1st place, massive well done!

Seb Toots was uncharacteristically unable to stomp his run 3 times leaving him is 9th place while Seppe Smits rode so good but didn’t seem to poll. If you missed tonight’s action check out Burton Global Open website for highlights.

Don’t forget tomorrow night will be the half pipe finals but womens pipe semi’s kicking off in the morning. Aussie Holly Crawford is absolutely KILLING it and has qualified 1st with a huge score of 97.33. Wishing her the bestest of luck!! The action will be kicking off 7pm AEST so jump back to here to see it all go down.