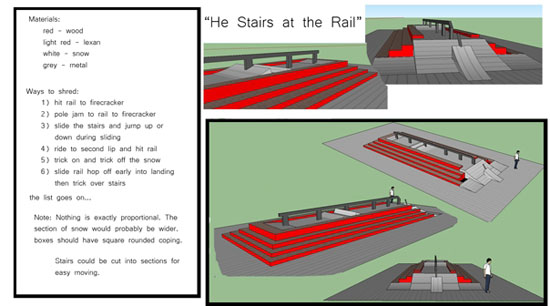 Design Unlikely Feature’s competition from Analog is all about creating unique, custom-built jib features. It invites riders to open their minds to the possibilities in the park. This is the second year running for the comp and it always provides some interesting features! Anyway, this year’s winner has been announced and the winning design is a well though out multi level rail and box feature. Check it out:

Analog’s 2nd annual Design Unlikely Features Contest invited participants to create a unique, custom-built jib feature. We received 343 submissions for this year’s contest-that’s a ton of totally new ideas! Entries were judged based on creativity, ride-ability, and build-ability. We looked for something fresh and imaginative, and that is also movable.

Jesse Paul from Maple Grove, MN, will have his dream creation built and Analog will bring him out for the weekend to the Design Unlikely Features Contest on December 18th, 2010. Big Bear Mountain Resort will host the event where he can participate in the first ever contest on his winning feature (of course there’s no pressure to compete it’s optional). In addition, Jesse will receive: