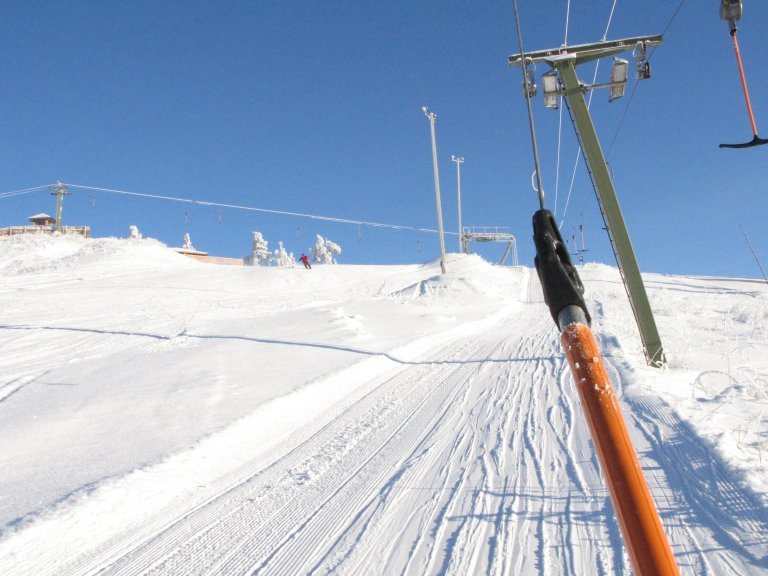 This is a guest post by Gavin Hope from Afterbang

Being a beginner is a challenging time for a snowboarder. Once you’re over those initial hurdles though, it’s time to put your new found board skills to good use, and get good! Here are 8 targets, or goals, to aim for as you progress from a beginner to an intermediate.

1. Linked turns. Linking turns should be your primary goal as a beginner, when you can do this, you’re snowboarding. But don’t stop there. Challenge yourself to link turns on progressively more difficult terrain. When you find yourself on more mellow terrain, be sure to spend time working on the perfection of your technique. Understand how your body is controlling the board. Don’t cheat on your turns.

Once you’re comfortable linking turns, start to working on the following goals…

2. Confidence using all lift types. Certain drag lifts can be a real chore for snowboarders, especially if the ride up is steep, sloping off to one side, or rutty. Don’t be afraid of using button lifts and t-bars. For sure, no one wants to fall off a lift, but if it happens, it’s not the end of the world. Most of us have done it at one point. It’s certainly not worth missing out on terrain you want to ride…

…Because that can happen. Sometimes the best terrain is accessed by a tricky drag lift, and when it comes time for you to ride that type of terrain, you don’t want to be held back by the lift. So start getting used to them early; now. Remember, if you’re nervous or afraid your body will stiffen up, which will make it harder to absorb the undulations of the lift ride, making you more likely to fall off. Stay relaxed and stay light. If the track is rutty, don’t fight it. Let your board follow the natural course. Tip: you don’t want a lot of weight over the front contact points of the board, because that will make it more likely to dig in.

If you know the flat section is coming, be confident and keep your speed by going straight. The aim is to carry enough speed to get you over the flat. Remember, the flat part is going to slow you down a lot, so although it may seem too fast at first, you can go faster than your normal ‘turning speed’ as you approach. As your confidence increases, you can go straight from higher up. The result: you’ll get better at crossing flats, which means less unstrapping!

The other aspect of being ready requires you to look ahead. As well as preparing for flat areas you know are coming, ideally you should be keeping an eye on what’s coming ahead. If you see some flat, start thinking about building up the speed to get across…

4. Learn to ride switch. Starting to ride switch sooner, rather than later, can actually make the process easier. Once you’ve been riding for quite a while, your regular direction becomes very comfortable. Not only does this make the switch direction seem more foreign, the gap in your ability between regular and switch can make riding switch seem too regressive – and it’s all too easy to ‘quit for now’ and go back to riding normally.

If you’re just graduating from beginner status, you might actually have an advantage when it comes to learning switch. All of the exercises you used to learn to ride the normal way will be fresh in your head, which is good because you’ll need them. It also won’t seem like such a step back, so you’re less likely to be put off by not being good at it straight away…

Riding switch is important. Get ahead of the curve, impress your friends, learn at the right time, learn early.

5. Flat-boarding. Linking turns is one thing, but riding with your base flat against the snow is harder than you would think. It is however, a useful skill to possess. If you’re on a narrow trail and there’s a bit of traffic, it isn’t always possible to make the turns you’d like to, sometimes you need to go straight. And, as an extension to point 3 above, having a flat base and staying straight helps with speed over flat sections…

An easier introduction to flat-boarding is to stay, very slightly, on one edge, usually the toe edge. This has some downsides though: you might end up drifting a little, you might end up shaving off some speed, and most of all, on long trails it can be tiring on the legs. So practice keeping your board flat. You want to avoid either of the front contact points (where the board is widest) taking hold and you catching an edge. To help with this, try shifting your centre of gravity backwards a little. Don’t lean back – that will put you off balance. The aim is to take a bit of pressure off the front of the board.

6. Ollies. The ollie is a fundamental snowboard technique; it’s easy to practice and easy to learn. Even if you don’t intend to pursue that much freestyle, the ollie will still help you with board control, body position and balance. What’s more, even if your main thing is blasting around the piste, being able to ollie will add no end of fun to ripping up the slopes.

This isn’t the article to explain how to ollie; the point is that it’s a good target for the progressing beginner. Once you’ve got some pointers to work on, it’s time to practice. You can start just being strapped in, without moving. Make a habit of throwing in one or two ollies each time you set off, before you pick up too much speed. When you’re riding around, look for little bumps, rollers and side-hits to help you get that feeling of getting some air.

7. 180s. Even for a progressing begginer, it’s not too early to start woking on 180s. Similar to learning ollies, even if you’re not freestyle minded, the 180 will serve you well around the regular slopes. Being able to 180 will improve your understanding of how the head, shoulders, hips and legs contribute to controlling the snowboard. It’s also a good way to change stance direction quickly, and it will enhance your switch riding.

There are four 180s to learn: fronstide, backside, switch frontside and switch backside. For fun, practice all of them. Use 180s as a way of changing between regular and switch direction. Without needing to go anywhere near a snowboard park, start on the flat slope, then use bumps, rollers and hits at the side of the piste. Your target is to ride smoothly around the piste, being able to ollie off little jumps, change direction using 180s and ride switch inbetween.

8. Carving. Now that you can link turns it’s important to continually improve your riding technique. Beginner linked turns can often include some bad habits. ‘Lifting’ or ‘pushing-out’ the back leg to control and steer the snowboard. Side slipping during the middle or exit of the turn to shave off speed. Pushing your bum out and bending at the waist on heel turns…

Carving represents the correct turning technique. Being able to carve well will enable you to ride with more control, and to ride faster. What’s more, the bad habits that work to get you around on easier slopes simply don’t work on more challenging terrain. Side slipping for example, breaks down on steep, icy or bumpy/cruddy terrain – the edge loses grip. To ride more advanced terrain, correct and effective edge control is required.

It may help to get some tuition, it may be enough to pick up some pointers online, from instructional material, or from some friends. Take the time to analyse your riding technique. Start to practice carving on easy/intermediate runs; look at the width of the mark that your turns leave in the snow. A good carve will be pencil-thin. Then gradually progress to more advanced terrain.